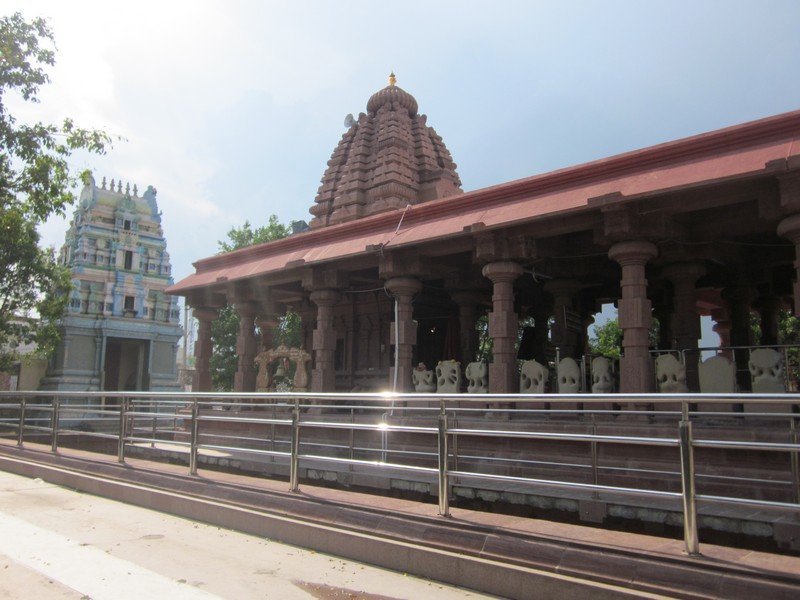 At a distance of 1 km from Alampur Bus Station, Jogulamba Temple dedicated to Shakti is the prime religious attraction of Alampur. Being the 5th Maha Shaktipeeta, this place is highly regarded and very important religious site for Hindus. Situated past Balabrahma Temple, this temple was destroyed by Bahamani sultan in 14th century and the deity was moved to Balabrahma temple. The current structure was built in 2005 on original site and the deity was moved back to the temple. Adi Sankaracharya installed Srichakra in the original temple in 8th century which could not be recovered after destruction.

The temple complex has a main entrance with a tower, large open area followed by the main shrine. The main structure is built on an elevated platform with a large mandapa followed by the inner sanctum. Constructed in Nagara style, the architecture of original temple is followed to build this temple. There is a large water pool around the temple.

Jogulamba Temple is one of the 18 Maha Shakti Peethas, representing the upper teeth part of Goddess Shakti. As per puranas, Goddess Shakti was born as Sati and married Lord Shiva. Sati's father, Daksha, who hates Lord Shiva, performs Nireeswara Yagna (non-existence of Shiva) and insults Shiva. Sati, attending the Yagna performed by her father gets upset as her husband was being insulted kills herself. Enraged by this, Lord Shiva performs Pralayatandava holding the body of Sati and starts destroying the universe. Upon the request of all gods, Lord Shiva releases his Sudarshana chakra and cuts the body of Sati into 51 pieces. The body parts of Sati fell in different parts of Indian subcontinent creating 51 Shakti Peethas, among which 18 are considered Maha Shakti Peethas.