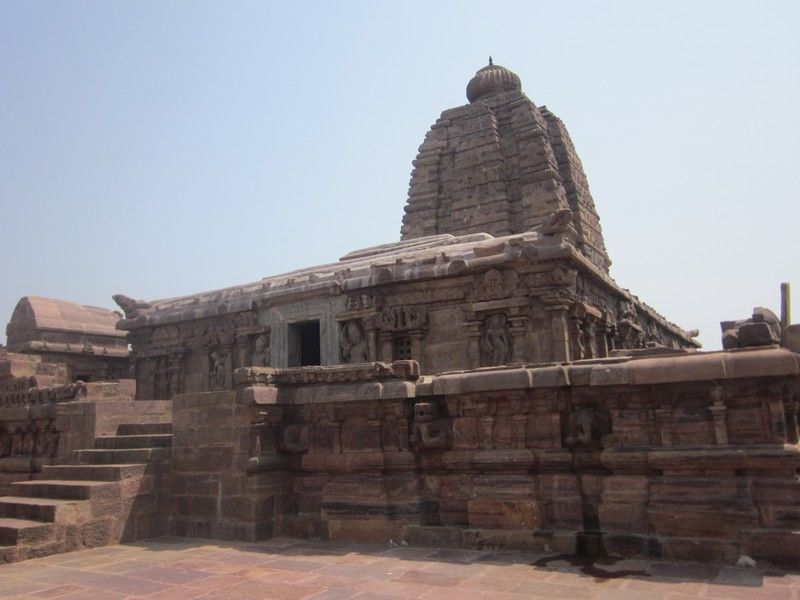 At a distance of 1 km from Alampur Bus Station, Kudala Sangameswara Temple is the most magnificent of the temples at Alampur. It was built in 740 AD by Chalukya ruler Pulakesi II.

The temple was originally located at the point where Tungabhadra and Krishna Rivers were merged, 10 kms away from the current site. The temple was dismantled and built exactly rock-to-rock in the current site in 1979, as the original site was getting submerged due to the construction of Srisailam Dam.

The Sangameswara Temple is a wonderful structure with beautiful carvings on all corners. Built in Nagara style, the temple is built on an elevated platform with fortified wall around the temple. The temple has got large hall with 12 pillars followed by the sanctum. There is a circumambulatory path around the sanctum for pradakshinas. The ceiling has a large relief of Nagaraja, as seen in other Chalukya temples. The pillars in the hall have nicely engraved images of Lord Vishnu, Brahma and Kumaraswarmy and celestial couple.

The front side of outer wall has carvings of Ardhanareeswra and Ganesha. The doorway has the images of Ganga and Yamuna. The sides of the outer wall has nicely carved Siva killing demon, Harihara, Manmadha, Yama, Shiva with 18 hands (similar to the one seen in Badami caves). All the four corners of the temple have crocodile carvings. You can see a human figure inside crocodile mouth in One of the corners. The human figure appears differently from each side, as child, youth and elder person. The outer walls of lattice windows have beautifully carved Toranas.

This is active temple with regular pujas being performed. There was a Marakata Linga found beneath the main shivalinga while moving the temple from the original site.