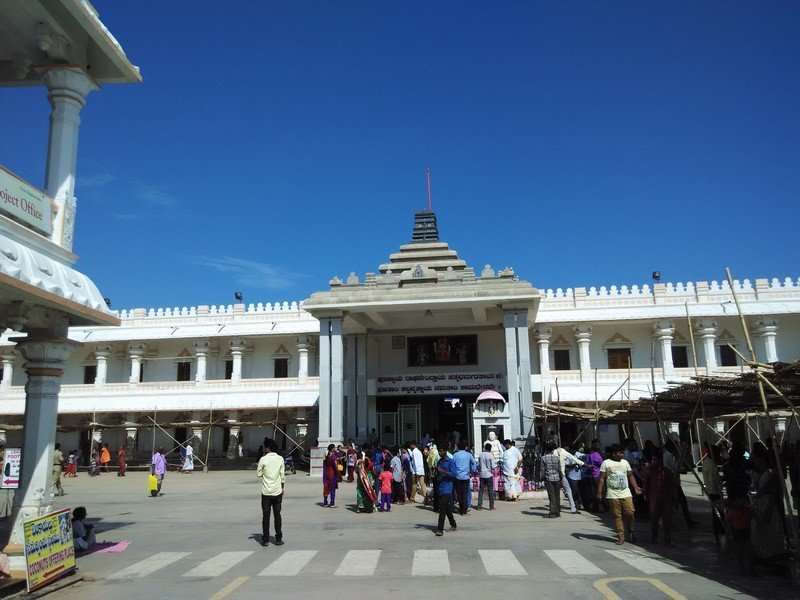 At a distance of 74 km from Kurnool, 148 km from Nandyal, 49 km from Adoni, 43 km from Raichur, 253 km from Hyderabad, 301 km from Hubli, 402 km from Bangalore and 416 km from Vijayawada, Mantralayam, also known as Manchale or Mantralaya is situated in Kurnool district of Andhra Pradesh. This is the place where the Vaishnava saint Sri Guru Raghavendra took Jeeva Samadhi (tomb) and is also one of the popular Places to visit in Andhra. Mantralayam is situated near the border of Karnataka and Andhra Pradesh along the banks of River Tungabhadra, a chief tributary of River Krishna.

Mantralayam is associated with the famous saint Sri Guru Raghavendra Swamy, renowned Hindu saint and philosopher. Sri Guru Raghavendra Swamy, lived between 1595 and 1671 was an influential saint in Hinduism. Followers of the saint consider him to be an incarnation of Bhakta Prahallada, who was saved by Vishnu in the avatar of Narasimha. Sri Raghavendra Swamy is said to have performed many miracles during his lifetime and has a large following even today. Mantralayam is a small and peaceful town situated on the banks of the River Tungabhadra and gets thousands of devotees from all over the country. He also served as the head of Sri Mutt of Kumbakonam from 1621 to 1671.

Accommodation is provided by the Mutt near the temple and room charges vary between Rs. 200 to Rs. 1000 per day (online booking not available yet). Private hotels and lodges also provide accommodation. It is advised to book the accommodation in advance as the place attracts devotees throughout the year.

Usually it takes one full day to visit Mantralayam and nearby places.

How to Reach Mantralayam

How to Reach Mantralayam - Full Details

Top 10 Places to Visit in Mantralayam

#1 of 9 Places to Visit in Mantralayam

The main shrine is situated in a large builing inside the sprawling temple complex. The building has large verandah inside with administrative blocks and Samadhi temple at the center of the building. The main shrine has large hall with queue lines and inner sanctum housing Brundavan of Guru Raghavendra.

Devotees visiting Mantralaya believe that the Saint still exists in his holy form after he had relinquished the material world and that he will continue to dwell in this form till the completion of 700 years from the time he attained 'Jeeva Samathi'. The male devotees who want to perform Pooja themselves at Brundavan have to wear dhoti. While male devotees paying normal .....

#2 of 9 Places to Visit in Mantralayam

At a distance of 1 Kms from Mantralayam Bus Station, Manchalamma Temple is situated on northern-west corner of Sri Raghavendra Brundavan Temple building, towards the right side of the entrance. After Samadhi Temple, this is the most important place to visit in Mantralayam town. This deity is another manifestation of Goddess Parvathi. It is a practice for people to worship at this shrine before proceeding to Sri Raghavendra Brindavan.

The Manchalamma Temple has a hall with sanctum built in the form of a mini temple with vimana. The colorful vimana is decorated with several figures of goddress .....

#3 of 9 Places to Visit in Mantralayam

At a distance of 20 Kms from Mantralayam, Panchamukhi Anjaneya Temple is situated at Panchamukhi in Karnataka, on the other side of River Tungabhadra. Panchamukhi is said to be the place where Raghavendra Swamy has performed meditation for 12 years before settling in Mantralaya. This is an important pilgrimage site for devotees visiting Mantralayam.

It is said that Panchamukha Anjaneya, Kolhapur Mahalakshmi, Lord Venkateswara and Lord Vishnu as Varaha appeared to Raghavendra Swamy at this location after his meditation. This famous five headed Anjaneya Temple is situated on a hillock and is very ancient. The idol of the Hanuman is believed to be self incarnated on a huge rock.

This place attracts large crowd during special days and Hanuman Jayanthi. Several devotees who visit Mantralayam pay a visit to the Hanuman temple here. Few shops near the temple sell food & drinks. There is a huge rock formation on eastern side of the .....

#4 of 9 Places to Visit in Mantralayam

#5 of 9 Places to Visit in Mantralayam

This idol of Venkateswara is believed to have been worshipped by Sri Raghavendra himself during his tenure. Located inside the village of Mantralayam amidst the houses, the temple has a gopura with dwarapalakas, followed by the main shrine which has a large pillared mandapa and the sanctum.

The mandapa is adorned with figures of Lord Venkateswara and his consorts. The idol of the deity is in blank stone inside the sanctum.

#6 of 9 Places to Visit in Mantralayam

At a distance of 20 Kms from Mantralayam, Bichali, also spelled as Bichchali, is a picturesque place on the banks of river Tungabhadra, and famous for Appannachararya who was the closest disciple of Raghavendra Swamy. Guru Raghavendra performed meditation at Bichale for several years. The place where the meditation was performed was called Japadakatte. It is situated on the banks of River Tungabhadra and prime attraction of Bichali.

Appanacharya has written Stotras and lifestyle of Sri Raghavendra Swamy which has spread across and became famous. Upon hearing of Swamiji's decision to enter Brindavana, Sri Appanacharya rushedto Mantralayam and found that Tungabhadra in full flow due to suddent rain. Unable to cross the river, he started singing Raghavendra stotra as a prayer to Swamiji. It is said that on hearing the stotras, River Tungabhadra slowed down to allow him to cross.

As Appanacharya arrived into the Math, he was mid-way .....

#7 of 9 Places to Visit in Mantralayam

At a distance of 25 Kms from Mantralayam, Chinna Tumbalam situated on Adoni road is famous for 200 years old Narasimha Swamy Temple.

Several buses and private vehicles from Mantralayam run to this place throughout the day.

#8 of 9 Places to Visit in Mantralayam

At a distance of 30 Kms from Mantralayam, Urukunda situated on Adoni road is famous for Narasimha Swamy Tample, also known as Veeranna Swamy Temple. This temple is recently renovated and a good place to visit in a close proximity to Mantralayam.

Several buses and private vehicles from Mantralayam run to this place throughout the day.

#9 of 9 Places to Visit in Mantralayam

At a distance of 4 km from Adoni Railway Station, 100 km from Kurnool, 52 km from Mantralayam & 310 km from Hyderabad, Adoni Fort is a wonderful historical site built in 15th century. This is also a good place for trekking in the rocks and ruins of the fort.

Adoni fort is one of the largest forts in India with the fortification walls running beyond 50 km in length. Adoni was a military base for the Vijayanagara Empire in the 15th century. After the downfall of Vijayanagara empire, it was taken possession by the Bijapur sultan. Adoni continued to be ruled as relatively independent region by nobles appointed by Bijapur sultans. Siddi Masud, the governor of Adoni made several additions to the fort including the construction of Jamia Masjid and several townships. Siddi Masud had been an avid collector of painting. Adoni later went into the hands of Mughal empire followed by Hyderabad Nizams. Tipu Sultan briefly occupied this region. After .....