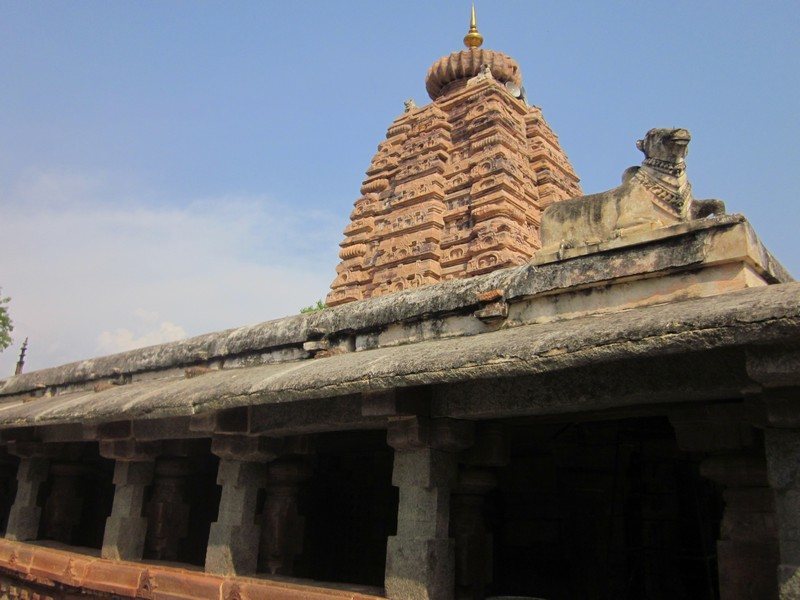 At a distance of 1 km from Alampur Bus Station, Bala Brahma Temple or Bala Brahmeswara Temple near Jogulamba Temple is the largest and most striking temple of the Navabrahma group of temples. This is the only temple where majority of the sculptures are found in good shape.

Built in 7th century by Chalukya ruler Pulakesi II, the temple had several additions during Vikramadita period in 755 AD. Constructed in Nagara style, there temple has large pillared varandah on all sides for outer pradakshinas. The temple has large mukha mandapa, mahamandapa and sanctum with circumambulatory path for inner pradakshinas. The shivalinga in this shrine is seen in the shape of a bull's footprint.

The doorway of inner sanctum has Dwarapalakas, Lion images along with Goddess Lakshmi, Ardhanareeswara, Vinayaka, Kalabhairava, etc. The inner mandapa has engraved figures of Mahishasura mardhini, Saptamatrukas, Indra and Agni along with a large dancing Shiva on the ceiling. The pillar has Yogamurthi image worshipping Lord Shiva. The mahamandapa has a large bull statue. The inner circumambulatory path has figures of Kanyakumari, Hanuman, Ganesha, Umamaheswara, etc.

The outer varandah has large figures of Yama with Chitragupta, Kubera and Surya. Several sculptures from this temple are placed in the museum. This is active temple with regular pujas.

There is a small shrine where Goddess Jogulamaba statue was placed for six centuries before the new temple was built in 2005. Navagrahas are installed on the southern side of the sanctum. The corners of the roof on outside have large nandi statues. There are several other sub-shrines around this temple housing Samiswara, Sahasra lingeswara, Jambukeswara, Nataraja, Mahishasura Mardhini, Moksheswara, etc.

There is a large stone slab with inscriptions from 7th century. Also, there is a pillar on northern side of the temple with old inscriptions.