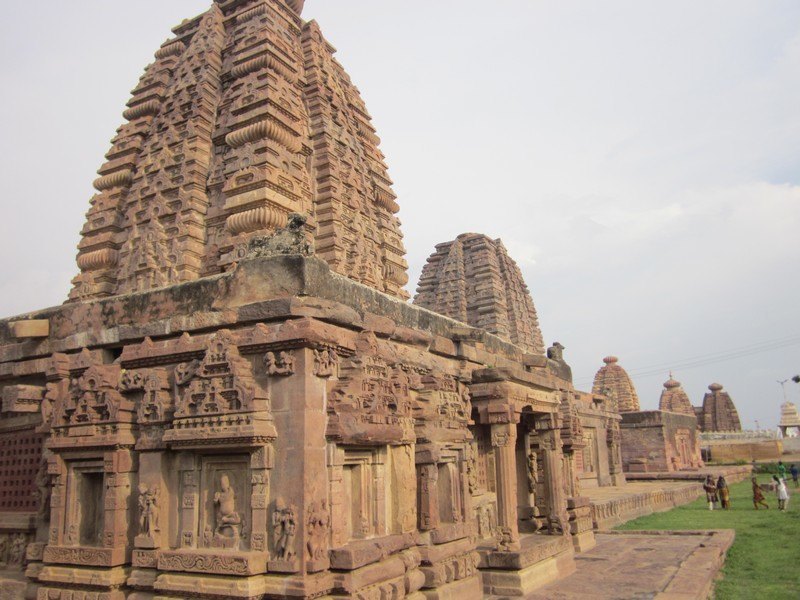 Situated on the banks of River Tungabhadra close to the place where the mighty rivers of Krishna and Tungabhadra merge, Alampur has rich historical and pilgrimage importance. Several dynasties ruled this place including Satavahanas, Chalukyas, Kakatiyas, Bahamani sultans, Vijayanagara kings and finally falling under Hyderabad. Alampur is one of the top attractions you must include in Hyderabad tour packages.

As per history of this place, Lord Brahma, after losing his powers due to a curse of a saint, performed penance for Lord Shiva. It is believed that Lord Shiva appeared in nine different forms, thus nine different temples to celebrate each form. The shivalinga in the main temple of Bala Brahma temple is seen in the form of footprint of a bull.

Chalukyas, who ruled this area from Badami for over two centuries, constructed nine magnificent temples called Navabrahma temples along with Sangameswara Temple between 640 AD and 753 AD. The temple construction was initiated by Chalukya King Pulakesi II during his visit to Alampur while returning to Badami after his victory over Pallavas of Kanchi. Later, the rulers of Rashtrakuta and Kalyani Chalukya Empires have contributed to the enhancement of these temples. The Navabrahma temples, named as Bala Brahma, Taraka Brahma, Swarga Brahma, Padma Brahma, Garuda Brahma, Kumara Brahma, Arka Brahma, Vira Brahma and the Vishwa Brahma are built in close proximity on the banks of River Tungabhadra. Among these, Bala Brahma temple is the biggest and only active temple. The Jogulamba Temple is also located near these temples and all the places can be visited together. Sangameswara Temple is about 2 Kms from Navabrahma temples site.

The original Jogulamba Temple and Taraka Brahma Temple were completely demolished by Bahamani Sultan army towards the end of 14th century. Vijayanaraga king Harihara Raya sent his army to stop the plunder of Bahamani Sultan's army and fortified the temple complex to stop further attacks on the temple.

The temples at Alampur could not be preserved pretty well, primarily due to the encroachments, lack of space and religious activity of Jogulamba and Balabrahma temples.

It takes about 3-4 hours to visit all the places in Alampur.

How to Reach Alampur - Full Details

Top 10 Places to Visit in Alampur

At a distance of 1 km from Alampur Bus Station, Vishwa Brahma Temple is the best preserved temple after Bala Brahma temple among Navabrahma temples. This temple hosts wonderful carvings throughout the structure.

Situated towards northern corner opposite to the museum beside Vira Brahma temple, architecture of this temple resembles that of Galaganatha Temple in Pattadakal. The temple boasts a large mahamandapa with 18 pillars followed by the sanctum. Built on an elevated platform, there is no mukhamandapa in this temple. Inner sanctum has a circumambulatory path for pradakshinas. The sanctum is supported by four pillars with carvings of Ramayana scenes, Gandharvas, Lions, etc. The ceiling has wonderful carvings of Nagabandha and lotus. The doorway of the sanctum has images of Gajalakshmi, Ganga and Yamuna along with their vehicles Crocodile and Tortoise.

The circumambulatory path around sanctum has few good images of ducks with two heads. The pillars in the mahamandapa have .....

At a distance of 1 km from Alampur Bus Station, Archeology Museum situated at the entrance of the Bala Brahma Temple complex houses wonderful collection of sculptures and inscriptions recovered from the Navabrahma Temples and surroundings of Alampur.

Started in 1953 by then Vice President of India Sarvepalli Radhakrishnan, the museum consists of 188 sculptures and 2 inscriptions. These artifacts are dated between 6th and 16th centuries. The museum is a large hall with an open air section at the center and a small enclosure towards the eastern side. All the artifacts are spread across the hall.

Some of the important sculptures in the museum include 7th century Surya, Nataraja, Lord Vishnu, Subrahmanya with Valli, Siva & Parvathi riding on Nandi, Saptamatrukas, Nagabandhas, Mahishasura mardhini, Nagnanaka Bandha, Ashtadikpalakas, Nagas among others. The Surya sculpture, one of the Nataraja figures along with a Mahishasura mardhini .....

At a distance of 1 km from Alampur Bus Station, Kudala Sangameswara Temple is the most magnificent of the temples at Alampur. It was built in 740 AD by Chalukya ruler Pulakesi II.

The temple was originally located at the point where Tungabhadra and Krishna Rivers were merged, 10 kms away from the current site. The temple was dismantled and built exactly rock-to-rock in the current site in 1979, as the original site was getting submerged due to the construction of Srisailam Dam.

The Sangameswara Temple is a wonderful structure with beautiful carvings on all corners. Built in Nagara style, the temple is built on an elevated platform with fortified wall around the temple. The temple has got large hall with 12 pillars followed by the sanctum. There is a circumambulatory path around the sanctum for pradakshinas. The ceiling has a large relief of Nagaraja, as seen in other .....

At a distance of 2 kms from Alampur Bus Station, Papanasi Temples are a group of wonderful temples dedicated to Lord Shiva. These temples are known for beautiful carvings.

Originally built on the banks of Tungabhadra River, the temples were moved to the current location during the construction of Srisailam Dam. The group of 24 temples were developed between 6th and 10th centuries. The main shrine called Papanaseswara was built by Chalukyas in the 6th century while the remaining temples were constructed by Rashtrakutas between 9th and 10th centuries. Built in Dravida and Phamsana styles, the site has two main temples and remaining are sub-shrines.

The main shrine of Papanaseswara has a large pillared mandapa and sanctum with Shivalinga. There are sub-shrines of Ganesha and Saptamatrukas on each side. The important art work in this temple includes Vamana avatara, Ashtadikpalakas, Mahishasura Mardhini, Ramayana scenes, .....

At a distance of 1 km from Alampur Bus Station, Jogulamba Temple dedicated to Shakti is the prime religious attraction of Alampur. Being the 5th Maha Shaktipeeta, this place is highly regarded and very important religious site for Hindus. Situated past Balabrahma Temple, this temple was destroyed by Bahamani sultan in 14th century and the deity was moved to Balabrahma temple. The current structure was built in 2005 on original site and the deity was moved back to the temple. Adi Sankaracharya installed Srichakra in the original temple in 8th century which could not be recovered after destruction.

The temple complex has a main entrance with a tower, large open area followed by the main shrine. The main structure is built on an elevated platform with a large mandapa followed by the inner sanctum. Constructed in Nagara style, the architecture of original temple is followed to build this temple. There is a large water pool around the temple.

At a distance of 1 km from Alampur Bus Station, Bala Brahma Temple or Bala Brahmeswara Temple near Jogulamba Temple is the largest and most striking temple of the Navabrahma group of temples. This is the only temple where majority of the sculptures are found in good shape.

Built in 7th century by Chalukya ruler Pulakesi II, the temple had several additions during Vikramadita period in 755 AD. Constructed in Nagara style, there temple has large pillared varandah on all sides for outer pradakshinas. The temple has large mukha mandapa, mahamandapa and sanctum with circumambulatory path for inner pradakshinas. The shivalinga in this shrine is seen in the shape of a bull's footprint.

The doorway of inner sanctum has Dwarapalakas, Lion images along with Goddess Lakshmi, Ardhanareeswara, Vinayaka, Kalabhairava, etc. The inner mandapa has engraved figures of Mahishasura mardhini, Saptamatrukas, Indra and Agni along with a large dancing Shiva on the ceiling. The pillar has Yogamurthi .....

At a distance of 1 km from Alampur Bus Station, Swarga Brahma Temple is a wonderful temple situated behind Bala Brahma Temple. This temple has extensive art work on the wall and pillars. Several figures were demolished during the attack in 14th century.

The doorway of the sanctum has figures of Ganga, Yamuna with their vehicles along with Nagendra. The circumambulatory path has images of Ganesha, Nagendra, Subrahmanya, Ducks and Lotus flowers. The ceiling of the mahamandapa has Nagabandha. The pillars have several engraved human figures. Some of these figures represent men riding lion and few mythical animals. There are statues of Ganesha, Maharshis spread in .....

At a distance of 1 km from Alampur Bus Station, Padma Brahma Temple is situated behind Swarga Brahma Temple. The tower of this temple was destroyed by the invading Bahamani Sultan army in 14th century and most of the sculptures were removed.

This temple has a large hall, inner sanctum and circumambulatory path for pradakshinas around sanctum. The doorway of the sanctum has carvings of Ganga and Yamuna. Images of Ganapati, Subrahmanya and Kubera can be found in circumambulatory path. The main doorway of the temple has dwarapalakas and Garuda. There are carved figures of several gods and gandharvas on the outer wall of the temple.

Built in nagara style, the temple has an eight pillared hall followed by the sanctum along with circumambulatory path around sanctum. The doorway is accompanied by Ganga, Yamuna and Nagas. There is a nice carving of Shiva and Parvathi above the doorway of the sanctum. The ceiling of the mahamandapa has Nagabandha and lotus which is a common pattern here. The pillars in the hall are plain and square without any carvings.

The doorway of main entrance has Dwarapalakas and Gandharvas. The outer walls of the shrine have miniature temple brackets. There are several carvings of warriors on the outer walls. One of the images here represents a warrior fighting with two opponents. There are also several figures of celestial couples on the walls.

There is a Nandi installed in the hall opposite to the sanctum which has a pendent of Shivalinga in the neck.

At a distance of 1 km from Alampur Bus Station, Arka Brahma Temple is situated on southern side of Vira Brahma Temple. It was built by Chalukya ruler Vikramaditya I in 7th century.

Built in Nagara style, the vimana of the temple was destroyed during Bahamani Sultan attack in 14th century. The shrine has a mahamandapa followed by the sanctum with circumambulatory path. Appears plain outside, the temple has several sculptures scattered inside the mahamandapa. The doorway of the sanctum was recently built as the original one was destroyed.

The Shivalinga inside the sanctum has a Naga image which is a unique feature. The pillars in mahamandapa are square and plain. There is a Nandi installed opposite to the sanctum in mahamandapa. Majority of the sculptures on outer walls of this temple were destroyed while few sculptures like Ashtadikpalakas are stored in the museum.