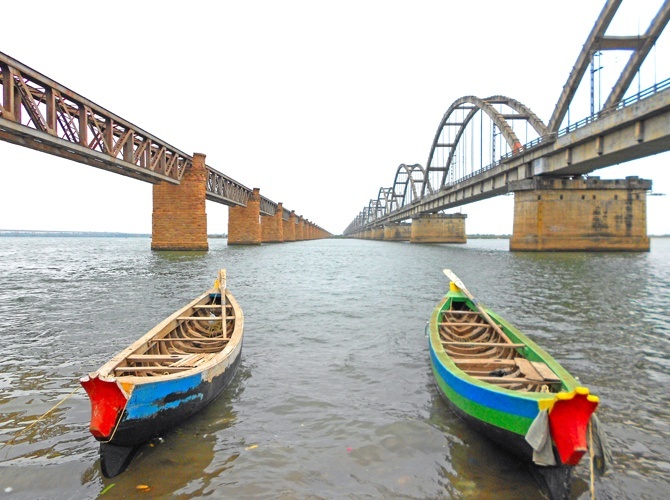 At a distance of 154 km from Vijayawada, 207 km from Vizag, 186 km from Guntur, 64 km from Kakinada, 151 km from Machilipatnam and 430 km from Hyderabad, Rajahmundry, formerly called as Rajamahendravaram, is a beautiful city located on the banks of Godavari River in Andhra Pradesh. It is also known as the 'cultural capital' of Andhra Pradesh and is one of the popular Tourist places in Andhra Pradesh. It is the birth place of Adikavi Nannayya who developed script for Telugu language. Rajamundry is one of the top attractions you must include in Vizag tour.

Rajahmundry is ranked amongst the oldest cities in the Indian subcontinent. The earliest rulers of the region were the Eastern Chalukyas. It was built by Chalukya king Rajaraja Narendra during 11th century. It was part of the Madras Presidency and was made into the District of Rajahmundry in the year 1823, during the British rule.

Rajahmundry is a blend of various qualities like picturesque landscapes, monuments of cultural importance, ancient temples and adventurous tourist spots that make the place unique, interesting and suitable for tourism for all ages. This is one of the major Pushkara Ghats on Godavari River. Pushkaras, held once every 12 years, is a holy congregation which sees millions of devotees taking a dip in the River Godavari. The last Pushkara was held in 2015. Godavari Bridge, Sir Arthur Cotton Museum, Dowleswaram Barrage, Kadiam Flower Nurseries, Papikondalu, Maredumilli Eco Tourism, Dindi and Pattiseema are some of the tourist places around Rajahmundry. Apart from the temples and film shootings around Godavari, this place is also known for Pulasa Fish, found only during monsoon season.

Rajahmundry is primarily a pilgrimage center due to the presence of a large number of temples in the city. Iskcon Temple / Gowthami Ghat, Sri Bala Tripura Sundari Temple, Kotilingeswara Temple, Draksharamam Temple and Markandeya Temple are the important pilgrimage centers around Rajahmundry. It is also famous for boat trips. The cruise on river Godavari from Rajahmundry to Rajahmundry (via Papikondalu) is one of the best tourist attractions in Andhra Pradesh.

The city has 4 bus stations. The main APSRTC Bus complex is located on the Morampudi Road. The other three bus stands are Kotipalli Bus Stand in Innispet, Gokavaram Bus Stand in Aryapuram, and the Kakinada Bus Stand near Kambalcheruvu. It is connected by bus with Chennai, Bangalore, Vizag, Tirupathi and Hyderabad.

How to Reach Rajahmundry - Full Details

Top 10 Places to Visit in Rajahmundry

#1 of 14 Places to Visit in Rajahmundry

At a distance of 2.5 km from Rajahmundry Railway Station, The Godavari Bridge or Kovvur-Rajahmundry Bridge is a truss bridge spanning Godavari river in Rajahmundry. It was commissioned by South Central Railway division of Indian Railways. It was inaugurated by the then President of India, Fakhruddin Ali Ahmed in 1974. It is Asia's second longest road-cum-rail bridge crossing a water body. This is very scenic place with wonderful views of the bridge and Godavari River.

This is the second bridge of the three bridges. The bridge is 4.2 km (2.7 km Rail & 4.2 km Road). At the location of the bridge, the river flows with a width of about 2.7 km, split into two channels with an island formation in between. The bridge has a road deck over the single track rail deck. This bridge, in addition to Godavari Arch Bridge, has been widely used to represent Rajahmundry in arts, media, and culture. It is one of the recognized symbols of Rajahmundry.

#2 of 14 Places to Visit in Rajahmundry

At a distance of 10 km from Rajahmundry Railway Station, Dowleswaram Barrage is an irrigation structure which is built at Dowleswaram, on the lower stretch of the Godavari River before it empties into the Bay of Bengal. The barrage was built by a British irrigation engineer, Sir Arthur Thomas Cotton.

This barrage provides water for East and West Godavari districts for agriculture. Before this barrage was constructed, this region was suffering from drought in summer and floods in monsoons. The barrage controlled the water flow and ensured continuous water supply to both Godavari district. The Dowleswaram Barrage is 15 feet high and 3.5 km long, with 175 crest gates to pass the floods. The full reservoir level of the barrage is 14 m MSL with 2.93 TMC gross storage capacity. The dam alignment crosses two mid-stream islands and the barrage was constructed in four sections, which allowed flood passage during the construction period which was completed in 1850.

#3 of 14 Places to Visit in Rajahmundry

At a distance of 35 km from Rajahmundry & 30 km from Papikondalu, Pattisam, also known as Pattiseema, is a beautiful place located on the banks of river Godavari in West Godavari district of Andhra Pradesh. It is situated between Rajahmundry and Papikondalu and can be reached by road and boat from Rajahmundry. There are two temples in Pattisam, Sri Veerabhadra Swamy, dedicated to Lord Shiva and Sri Bhava Narayana Swamy dedicated to Lord Vishnu. This temple is one of the Panchakasi Kshetras. The other four temples are at Kedarnath, Kashi, Kalahasti and Srisailam.

Sri Veerabhadra Swamy or Sri Veereswara Swamy Temple is located on Devakuta Hill in the middle of the River Godavari. The temple was bulit by Cholas in 11th Century AD and it was reconstructed by Raja Kocherlakota Jaggaiah in 19th Century. He donated 1900 acres of land to this .....

#4 of 14 Places to Visit in Rajahmundry

#5 of 14 Places to Visit in Rajahmundry

Lord Shiva is worshipped as Ksheera Ramalingeswara Swamy at this temple. The temple tower is one of the tallest among the temple towers in Andhra Pradesh. The height of the temple is 120 ft with 9 floors constructed during the reign of Chalukya Bheema in 9th century. The Prakara was designed by Sri Velupathi during 10th century. Gopuram was constructed by Sri Alladu Reddy during 14th Century. This ancient temple has been listed as a protected monument by the Archaeological Department. .....

#6 of 14 Places to Visit in Rajahmundry

The statue of the lord is visible above the waist and the lower portion is imagined to be in the earth. The holy feet are said to be offered to Bali Chakravarthi in Patala .....

#7 of 14 Places to Visit in Rajahmundry

According to legend, Tharakasura worships .....

#8 of 14 Places to Visit in Rajahmundry

At a distance of 60 km from Rajahmundry, 180 km from Vijayawada, 20 km from Polavaram, 260 km from Vizag & 410 km from Hyderabad, Papi Kondalu is a breathtakingly beautiful hill range bounded by River Godavari in the state of Andhra Pradesh. Papi hills are a set of three hills which form a beautiful gorge on the Godavari River spread across East Godavari and West Godavari districts. Entire area of Papi Kondalu is covered by tropical rain forests and it was recently declared as a protected National Park and is one of the top places to experience the Tourism in Andhra Pradesh. Papikondalu is one of the top attractions you must include in Vizag tour packages.

The original name for this hill range was 'Papidi Kondalu'. Papidi is a rough translation for partition in Telugu. It is believed that the place was visited by Lord Rama and goddess Sita during their exile. Papi Kondalu has .....

#9 of 14 Places to Visit in Rajahmundry

#10 of 14 Places to Visit in Rajahmundry