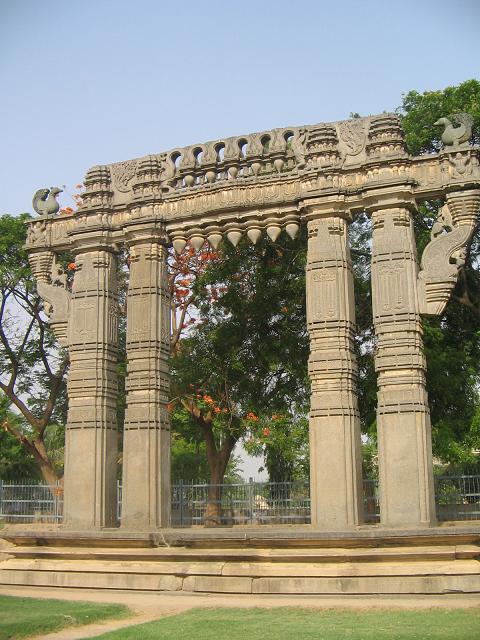 At a distance of 149 km from Hyderabad, 142 km from Nalgonda, 118 km from Khammam, 241 km from Vijayawada and 523 km from Visakhapatnam, Warangal or Orugallu or Ekasila Nagaram is a historical city in Warangal district of Telangana. Warangal is the district headquarters and the second largest city in Telangana after Hyderabad. It is also one of the famous weekend getaways from Hyderabad and an important historical site in Telangana. This is one of the popular places to experience Telangana tourism. Hanamkonda is its twin city.

Warangal was the capital of a Hindu Shaivite kingdom ruled by the Kakatiya dynasty from the 12th to the 14th centuries. Its old name was Orugallu where Oru means one and Kallu means stone. The entire city was reportedly carved using a single rock. The cultural and administrative distinction of the Kakatiyas was mentioned by the famous traveler Marco Polo. Famous rulers of Kakatiya dynasty include Ganapathi Deva, Prathapa Rudra, and Rani Rudramma Devi. After the defeat of Prathapa Rudra, the Musunuri Nayaks united seventy two Nayak chieftains and captured Warangal from Delhi sultanate and ruled for fifty years. Jealousy and mutual rivalry between Nayaks ultimately led to the downfall of Hindus in 1370 AD. It was occupied by Bahmani Sultanate followed by the takeover of Mughal emperor Aurangzeb and later in 1724, it had become part of Hyderabad state.

The best season to visit Warangal is from October to March while the Peak Season is from November to February. It usually takes 2 days to visit major places around Warangal.

How to Reach Warangal - Full Details

Top 10 Places to Visit in Warangal

At a distance of 6 Kms from Warangal Railway Station (in Hanmakonda part of the city), Thousand Pillar Temple is one of the finest examples of Kakatiya architecture.

Rudra Deva built this temple in 1163 AD in the style of star shaped Chalukyan temples and named after him as Sri Rudreshwara Swamy Temple, it is dedicated to Lord Shiva. Separate shires for Lord Surya & Lord Vishnu in the temple are connected to main shrine by a square mandap in the centre. A beautifully carved giant Nandi (bull) is seen on the platform connecting the shrines. The exterior wall of the temple, the ceiling slabs and the four central pillars of the mandap are decorated with finely carved sculptures. Poojas are still performed.

The actual thousand pillar hall situated behind Nandi in the temple complex is currently being renovated by the archelogical department and closed for visitors.

The temple is located between Warangal and Hanmakonda Chowrasta, close to main road.

At a distance of 5 Kms from Warangal Railway Station, the historic Warangal Fort was built by Kakatiyas in 12th Century AD. The King Rudradeva started construction of this Fort when the capital was shifted from Hanamankonda. It was further extended by his nephew, Ganapati Deva and was finally completed by Princess Rani Rudrama Devi. The fort was mostly destroyed by invaders and only the ruins can be seen now. It is one of the popular tourist places to visit near Hyderabad as a weekend getaway.

Most of the fort is filled with settlements and small area in the center of fort has Open Air Museum with architectural remains of Kakatiyas. The famous stone gateways (called Kirti Toranas) are situated here, about 30 feet high and still standing, a masterpiece carved from a single rock.

The Shambhulingeshwara Temple dedicated to Lord Shiva is opposite to Open Air Museum.

At a distance of 5 Kms from Warangal Railway Station, the Bhadra Kali Temple is situated on top a hillock towards Hanamkonda. This temple is famous for 2.7 meter stone idol of the deity with eight arms and a weapon in each hand, in sitting posture. This deity is believed to be worshipped by the Chalukyan ruler Pulakesin-II in the year 625 AD.

The temple is dedicated to Goddess Kali, found in peaceful mood. This temple is located on the banks of Bhadrakali Lake. There is a park adjacent to the temple along Bhadrakali Lake which also has a shrine for Lord Siva in the form of Sri Chandra Mouleeswara.

Brahmotsavas are held every year in the month of April/May in a grand manner. The festival attracts thousands of devotees from all over the region of Telangana.

At a distance of 66 km from Warangal, Ramappa Temple (also known as Ramalingeswara Temple) is situated in a valley at Palampet village of Venkatapur Mandal in erstwhile Mulug Taluka of Warangal district.

Ramappa Temple is an ancient temple built by a General Recherla Rudra, during the period of the Kakatiya ruler Ganapati Deva in 1213 AD. The history says that it took 40 years to build this temple. This temple is constructed in the South Indian architectural style and is devoted to Lord Shiva. The temple got its name from Ramappa, the chief sculptor of the temple. It's probably the only temple in the country to be known by the name of its sculptor.

The temple stands on a 6 feet high star-shaped platform. The sand stone temple is crowned with a grand sikhara and is surrounded by pradakshina patha. The Ramalingeswara Temple consists of garbhagriha, large ranga mandapa and a mukha mandapa. At the entrance of the temple, we can .....

At a distance of 83 km from Warangal and 81 km from Hyderabad, the 2000 years old Jain Temple of Mahavira is located in Kolanupaka village (also called as Kulpak) in Nalgonda district. The temple is decorated with beautiful images of Tirthankaras and it's one of the important Jain pilgrimage sites in the country. It is also a popular place to visit around Warangal & Hyderabad. Kulpakji is an important pilgrimage center for Swetambara Jains of South India. This is one of the popular one day trip near Hyderabad and among the prime place to visit on a Hyderabad tour.

According to the mythological legend, the main temple of Kolanupaka is said to have been built by Emperor Bharata, son of King Dushyanta and Queen Sakuntala. Jainism was prevalent in Andhra Pradesh &

At a distance of 6 Kms from Warangal Railway Station (in Hanmakonda part of the city), Siddheshwara Temple is an ancient temple dedicated to Lord Shiva.

The temple architecture is marvelous and is similar to Chalukyan style of architecture. The temple as whole is decorated amazingly with intricately carved pillars. This is an important shivaite temple in Warangal. Devotees throng to this holy temple during the Maha Shivarathry festival. The temple has a majestic look and the surroundings are serene and peaceful.

At a distance of 82 Kms from Warangal and 82 Kms from Hyderabad, Sri Veeranarayana Temple is an ancient temple built in 403 AD, located in Kolanupaka village in Nalgonda District.

This highly revered temple is dedicated to Shri Veeranarayana, an incarnation of Lord Vishnu. The temple architecture is good and it resembles the Chalukya style of architecture. This is an important Vaishnava temple in Warangal. It is claimed that this was an ancient Jain temple later converted to a Hindu temple.

The temple is situated at a distance of 1 Km from Kolanupaka Bus Station and 1.5 Kms from Jain Temple. It is on the way to Sri Someswara Temple which is 0.5 Kms away. It seems the temple lost its glory and currently being maintained by Archeological Department. Poojas are still being performed.

At a distance of 5 Kms from Warangal Railway Station and 1 Km from Bhadrakali Temple, Musical Garden is a beautiful garden situated on the banks of Bhadrakali Lake.

The main attraction of this garden is a magnificent musical fountain with a huge rock having an artificial water fall in the background. Though the park has Rose Garden, Children Park and Duck Pond, it's not a well maintained place. The park still attracts large crowd on weekends and Holdays.

Boating in Bhadrakali Lake is available from here. The only show of Musical Fountain starts at 7:45 PM.

At a distance of 18 Kms from Warangal, Sri Mallikarjuna Swamy Temple located in Inavole (also called as Inole) is considered as one of historical temples of Shiva in this region.

The Lord Shiva in this temple is in human form along with his two conserts. The construction of this 11th century temple was ordered by Sri Ayanna, a minister of the Kakatiya dynasty. The main attraction of the temple is the 108 pillars put together in form of a chariot. The rich architectural carvings depicting the Kakatiya dynasty with 4 entrance gates and a Keerthi Toranam on the main entrance attract the devotees. This large temple complex is being maintained by archeological dept. Poojas are still performed.

To reach Inavole, drive for 11 Kms from Khammam highway (there is a big arch entrance here welcoming to Mallikarjuna temple), take right turn and drive for 7 Kms. All buses towards Khammam stop at Arch entrance & autos are available to Inavole from here.

At a distance of 69 Kms from Warangal and 1 Km from Ramappa Temple, Ramappa Lake is a magnificent example of irrigation work of Kakatiya Rulers. Constructed in 13th Century AD by King Ganapathi Deva, the waters of this lake are spread over an area of more than 82 Sq. Kms. The lake still provides water to irrigate 10,000 acres of land.

The lake is over looked by beautiful hill ranges in the background providing a spectacular view especially at Sunset time. It is an excellent place for picnic and one can simply come here and relax under the shade of sprawling trees or walk around appreciating the beauty of nature.

There is a small AP Tourism cottage near the lake which also serves food on demand.

Boating facility is available here. Fee: Rs. 15 for Adult and Rs. 10 for Child.