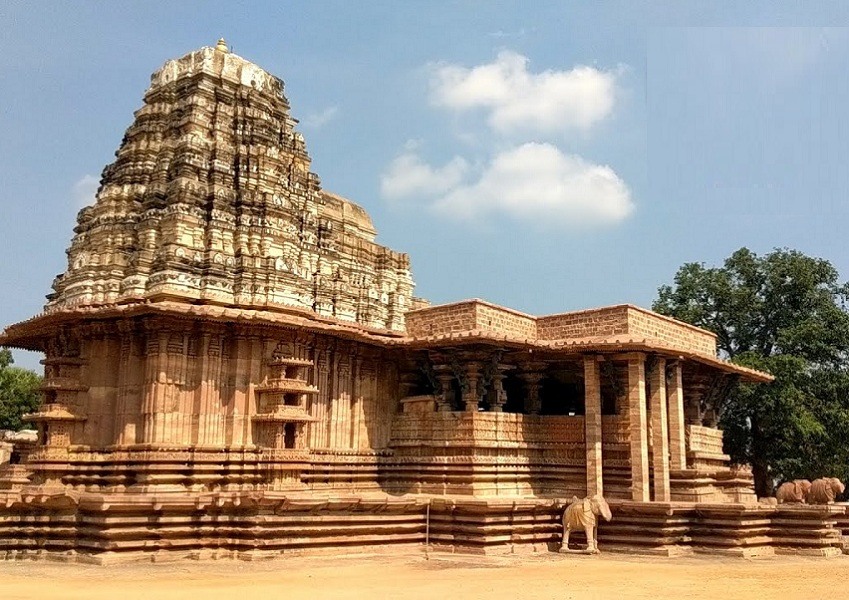 At a distance of 15 km from Mulugu, 65 km from Warangal, 116 km from Karimnagar, 152 km from Khammam, 210 km from Nalgonda, 211 km from Hyderabad, and 280 km from Vijayawada, Ramappa Temple is a historical temple situated at Palampet village in the Warangal district of Telangana. It is one of the famous weekend getaways from Hyderabad and among the most important places of heritage in Telangana.

Dedicated to Lord Shiva, Ramappa Temple or Ramalingeshwara Temple was built by General Recherla Rudra, during the period of the Kakatiya ruler Ganapati Deva in 1213 AD. As per history, it took 40 years to build this temple. The temple got its name from Ramappa, the chief sculptor of the temple. It's probably the only temple in the country to be known by the name of its sculptor, and among the popular places to experience Telangana Tourism. Known for its splendid architecture & intricate carvings, the temple has been on the tentative list of UNESCO World Heritage Site under 'The Glorious Kakatiya Temples and Gateways', since 2014. And, it has been conferred with a World Heritage Site status on 25th July 2021, making it the 39th World Heritage Site of India.

Ramappa Temple is constructed in the South Indian architectural style. Stands on a 6 feet high star-shaped platform, the sandstone temple is crowned with a grand sikhara and is surrounded by a pradakshina path. The Ramalingeswara Temple consists of garbhagriha, large ranga mandapa and a mukha mandapa. At the entrance of the temple, one can find a large Nandi mandapa that houses an imposing 9 feet Nandi statue. The corners of the ceiling at all 3 entrances have a total of 12 sculptures of madanikas marvelously carved in different poses, which are the main attraction of the temple. The figures of madanikas made from black granite with metal-like finishing resemble the famous sculptures of Belur Chennakesava Temple. The hall in front of the sanctum is filled with exquisitely carved pillars. The walls of the temple exhibit carvings depicting stories from the Mahabharata and the Ramayana.

Aside from its architecture and elaborate carvings, Ramappa Temple is known for its architectural brilliance that gives us a glimpse of the technical innovations in the form of floating bricks, sand-box foundations, selection of building material, and masterful stone sculpting. The lower part of the temple comprises red sandstone, its foundation is built with the 'sandbox technique' to make the temple earthquake-proof, and the pillars include basalt. The pyramidal vimana of the temple is made of lightweight porous bricks, so-called 'floating bricks', which reduced the weight of the roof structures. The bricks were believed to be made spongy using something like saw-dust. It is one of the must-visit Warangal tourist places.

The temple compound enclosed by high walls contains several other ruined structures including two other smaller temples on either side of the main temple. These two structures were also dedicated to Lord Shiva are known as Kameswara and Kateswara. Maha Shivaratri is grandly celebrated for three days at this temple every year.

The best season to visit Ramappa Temple is from October to March while the Peak Season is from November to February.

How to Reach Ramappa Temple

#1 of 9 Places to Visit in Ramappa Temple

At a distance of 11 km from Mangapet, 73 km from Laknavaram, 87 km from Ramappa Temple, 88 km from Bhadrachalam, and 132 km from Warangal, Hemachala Narasimha Swamy Temple, also known as Malluru Narasimha Swamy Temple is a Hindu temple located at Mallur in the Jayshankar Bhupalpally district of Telangana. It is one of the popular places of pilgrimage in Telangana, and among the must-include places in Ramappa Temple tour packages.

Hemachala Narasimha Swamy Temple is dedicated to Lord Narasimha, an incarnation of Lord Vishu. The temple is situated at an altitude of about 1,500 feet on Puttakonda (hillock) amid the forest. According to mythology, demon king, Ravana has given this place to his beloved sister a gift, Shurpanaka where the great Rama killed some 14,000 demons led by Khara Dushana. It was Agastya, the great sage who gave the current name to the sanctuary as Hemachalam.

This temple has many specialties. The deity Narasimha Swamy is embodied from a Volcano mountain. .....

#2 of 9 Places to Visit in Ramappa Temple

At a distance of 3 km from Thirumalagiri, and 25 km from Ramappa Temple, Pandavula Guhalu is an ancient cave site situated near Thirumalagiri in the Jayshankar Bhupalpally district in Telangana. It is one of the famous places of heritage in Telangana, and among the best places to visit during the Ramappa Temple tour.

Pandavula Guhalu is a prehistoric habitation site situated atop Pandavulakonda or Pandavula Gutta. The site was first discovered in the year 1990. Paleolithic cave paintings have been found here which offer a rare glimpse into the prehistoric man's rock art identified on walls and ceilings of caves, rock shelters, and isolated boulders. Experts say these cave paintings date back to at least the 7th Century.

The rock art paintings depict wildlife like Bison, Antelope, Tiger, Leopard, etc. Other shapes like the swastika symbol, circles, and squares, weapons such as bows, arrows, swords, and lancers, etc are present in these paintings. The paintings also feature .....

#3 of 9 Places to Visit in Ramappa Temple

At a distance of 1 km from Ramappa Temple, 69 km from Warangal, Ramappa Lake is a manmade lake situated at Ramappa, Telangana. It is one of the must-include places in Ramappa Temple Tour Packages.

Ramappa Lake is a magnificent example of the irrigation work of Kakatiya Rulers. Constructed in the 13th Century AD by King Ganapathi Deva, the waters of this lake are spread over an area of more than 82 Sq. km. The lake still provides water to irrigate 10,000 acres of land.

The lake is surrounded by beautiful hill ranges that provide a spectacular view, especially during sunset. It is an excellent place for a picnic and one can simply come here and relax under the shade of sprawling trees or walk around appreciating the beauty of nature.

One can go for a short boating trip in the placid waters of the lake. There is a small AP Tourism cottage near the lake which also serves food on demand.

#4 of 9 Places to Visit in Ramappa Temple

At a distance of 29 km from Ramappa Temple, and 75 km from Warangal, Laknavaram Lake is a wonderful artificial lake situated close to Etunagaram highway (NH202). It is the large lake in the Warangal district, and among the top Ramappa tourist places.

Laknavaram Lake was built by Kakatiyas in the 13th century. It still provides water for irrigation over 50,000 acres of land. The magnificent lake is surrounded by the thick forests of Eturnagaram Sanctuary. The suspension bridge across the lake is a special attraction.

Laknavaram is one of the best places to visit around Warangal and it's a perfect getaway to spend time with family. Boating facilities are available in the lake on speed boats and motorboats. Telangana Tourism provides accommodation facilities along with a restaurant on the island in the middle of the lake.

Post monsoon is the best season to visit this place when the lake is filled with water and the surrounding hills are covered with thick vegetation. Laknavaram .....

#5 of 9 Places to Visit in Ramappa Temple

At a distance of 30 km from Eturnagaram, 89 km from Ramappa Temple, 120 km from Bhadrachalam, and 140 km from Warangal, Bogatha Waterfall is a nice waterfall situated near Chikupally village in Wajedu Mandal in Khammam district of Telangana. Also known as Chikupally Falls, this is one of the popular tourist places to visit near Hyderabad, and among the best waterfalls in Telangana.

Situated in a forest region between Kaleswaram and Bhadrachalam, Bogatha Falls is formed on Chikupally Vagu that merges with River Godavari. Situated amidst thick vegetation, Bogatha Falls is a favorite picnic spot for the residents of nearby villages. Dropping from a height of over 30 feet in several parallel streams, the water is collected into a large pool at the bottom of the falls. Swimming in the pool is a favorite activity here and swimming here is considered safe.

To reach the falls from Eturnagaram, drive past Godavari Bridge and reach Chikupally village which is 11 km from New Godavari .....

#6 of 9 Places to Visit in Ramappa Temple

At a distance of 50km from Ramappa Temple, 95 Kms from Warangal & 260 Kms from Hyderabad, Medaram is famous for Samakka Sarakka Jatara held once in every two years during the month of February. It is located within Ethurnagaram Wildlife Sanctury.

Sammakka is mother of Sarakka; both belong to the tribal community in Medaram village. In 14th century, Sammakka & Sarakka fought against Kakatiyas ruler Prathaparudra who tried to occupy the tribal territories. Finally, they lost their lives along with all their family members during the brutal fight.

The Sammakka Sarakka Jatara (Festival) is held to offer tribute to the brave mother-daughter warriors. Approximately 6 million people converge over three days around the small village of Medaram and its adjacent, Jampanna Vagu. This fair is said to be the largest repeating aggregation of tribal communities in the whole world.

#7 of 9 Places to Visit in Ramappa Temple

At a distance of 50 Kms from Warangal and 130 Kms from Hyderabad, Phakal Lake is constructed by Ganapathi Deva in 1213 AD by harnessing a small tributary of the Krishna River. This lake is spread over an area of 30 Sq. Kms. This is an ideal weekend getaway around Hyderabad

Adjacent to the lake, Pakhal Wildlife Sanctuary is spread over 839 sq. kms. The sanctuary presents a beautiful landscape with a dense and a rich store of animals. it is indeed a delight for the tourists to see so many animals amidst a wonderful backdrop.

One can spot a tiger or a leopard or a bear and one can find a herd of deer roaming about freely in the wild. The sanctuary is also harboring Marmals like panthers, hyensa, wolf, wild dogs, jackals, sloth bear, nilgal, porcupine, langoor, Reptiles like python, cobra, common krait, monitor lizard and Crocodiles.

This place is connected by direct buses from Warangal.

#8 of 9 Places to Visit in Ramappa Temple

At a distance of 11 km from Ramappa Temple, and 75 km from Warangal, Ghanpuram Temples, also locally called Kotagullu are a group of ancient temples situated at Ghanpuram village. It is one of the popular places of heritage near Ramappa Temple.

These temples are constructed within a double-walled stone enclosure that demonstrates Kakatiya art and architecture. The main attraction of these temples is the one dedicated to Lord Siva. The sculptures in Sabhamandapam here are very attractive and nicely carved.

These temples are abandoned & damaged; especially the Siva temple in the center has severe damages with a collapsed roof. Many sculptures are scattered all around the place and many important sculptures have been theft.

To reach these temples, go straight for 8 Kms from Ramappa Temple Arch on the main road towards Ghanapuram. The temples are 1 Km from Ghanapuram village. No directions are available from Ghanapuram so one needs to ask locals for directions.
Timings: .....

#9 of 9 Places to Visit in Ramappa Temple

At a distance of 63 km from Ramappa Temple, and 109 km from Warangal, Eturnagaram Wildlife Sanctuary is a reserved forest situated near Eturnagaram in the Mulugu district of Telangana, India. It is one of the oldest sanctuaries in South India, and among the best places to visit near Hyderabad for wildlife lovers.

Eturnagaram was declared as a wildlife sanctuary in 1952 by Hyderabad Nizam Government. The sanctuary is located near the border of Maharashtra, Chhattisgarh, and Telangana. The famous Sammakka-Saralamma Temple is situated inside the sanctuary. This sanctuary is spread over an area of around 806 sq. km.