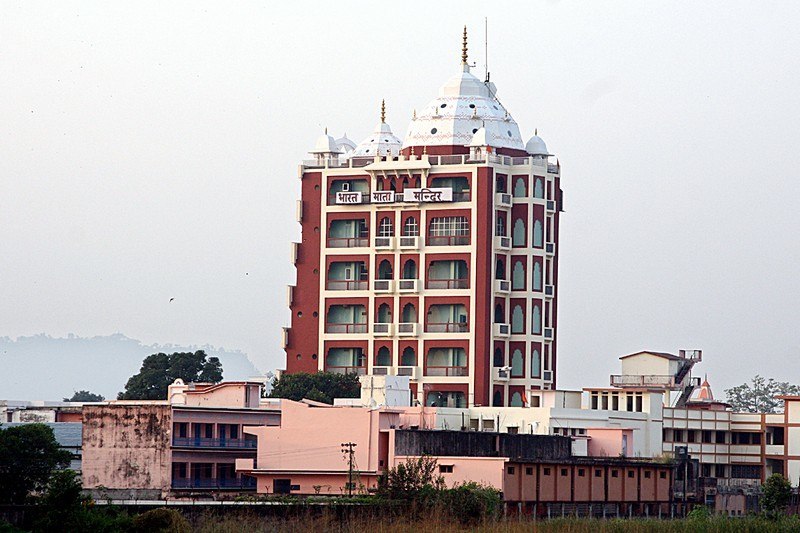 At a distance of 6 km from Haridwar Junction Railway Station, Bharat Mata Mandir, also known as Mother India Temple, is situated at Motichur in Haridwar. This temple is one of the most visited temples in Haridwar

Bharat Mata Mandir is a famous multi-storey temple of Mother India built to salute the dedication of all the patriots and freedom fighters. This shrine was founded by Swami Satyamitranand Giri. It was inaugurated by Late Prime Minister, Smt. Indira Gandhi, in the year 1983.

With a height of 180 feet, the temple stands tall with eight stories and each story has different theme dedicated to several legends and deities. In addition, the Bharat Mata Mandir is also dedicated to all the patriotic freedom fighters, who contributed to the freedom of the country. There is a lift facility to reach upper floors of the temple.

On the first floor, Statue of Bharat Mata adorns the hall, where the Goddess is holding a milk pot in one hand and stack of grain in the other hand. This floor also comprises a huge map of India on a raised platform. Shoor Mandir is the title granted to the second floor and it is dedicated to the legendary heroes of India. The third floor is known as Matru Mandir that celebrates the achievements of honored women like Meera Bai, Savitri, Matiri etc.

The great saints from various religions, including Jainism, Sikhism, and Buddhism are featured on the fourth floor Sant Mandir. The assembly hall with walls depicting symbolic coexistence of all religions practiced in India and paintings portraying history and beauty in various provinces of India are situated on the fifth floor. The various forms of the Goddess of Shakti can be seen on the sixth floor, while the seventh floor is devoted to all incarnations of Lord Vishnu. Dedicated to Lord Shiva, the eighth floor offers a splendid view of the Himalayas and the complex of Sapt Sarovar.