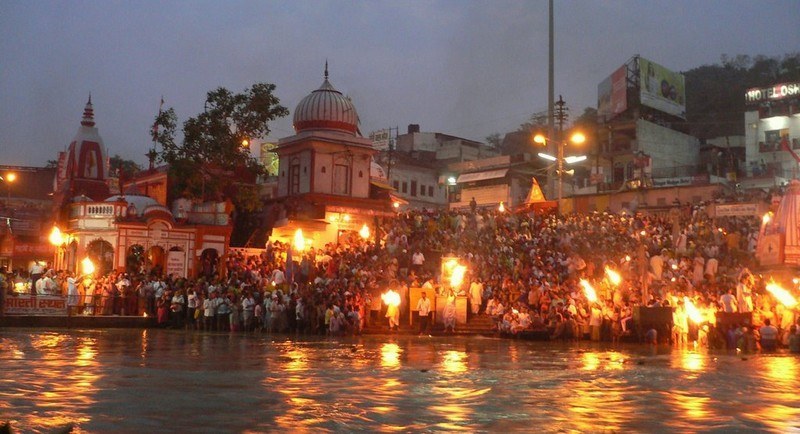 At a distance of 2 km from Haridwar Junction Railway Station, Har Ki Pauri is a famous ghat on the banks of the River Ganges in Haridwar. This revered place is the major landmark of the holy city of Haridwar.

Har Ki Pauri was constructed by King Vikramaditya in memory of his brother, Brithari in 1st century BC. It is said that Brithari used to mediate on the banks of River Ganges. Har Ki Pauri, one of the most famous places in Haridwar, is believed to be the precise spot where the Ganges leaves the mountains and enters the plains.

Lord Shiva and Lord Vishnu are believed to have visited the Brahmakund in Har Ki Pauri in the Vedic times. It is also said that Lord Brahma, who is the Hindu God of Creation, performed a yagna at this place. There is a large footprint said to belong to Lord Vishnu on a stone wall. An area within Har Ki Pauri, where the evening Ganga Aarti takes places is considered most sacred and is known as Brahmakund. It is believed to be the same place where the divine nectar fell from celestial Kumbh while being carried by the divine bird, Garuda after the Samudra Manthan. Some of the other attractions located on this ghat are the two famous temples, Ganga Mandir and Haricharan Mandir.

The Ganga Aarti that takes place at Har Ki Pauri every evening after sunset is popular amongst pilgrims and tourists all over the world. A group of Brahmins hold huge fire bowls in their hands and offer holy mantras to river Ganges and Lord Shiva. Devotees float diyas with flowers in the holy river while chanting prayers. Witnessing the golden orange shades of floral diyas reflected in the Ganga River at night is a spectacular sight.

According to a popular belief, it is said that a dip in the holy water of this ghat relieves a person of all his sins. This is also the area where thousands of pilgrims converge and the festivities commence during the Kumbh Mela, which takes place every twelve years, and the Ardh Kumbh Mela, which takes place every six years and the Punjabi festival of Vaisakhi, a harvest festival occurring every year in the month of April. In addition, the place is also a venue for performing several religious rituals such as upanayan, mundan, asthi visarjan and shraddha, which are carried throughout the year.

Evening Aarti Timings (depending on sunset): Around 5 PM (Winter) to Around 6 PM (Summer)