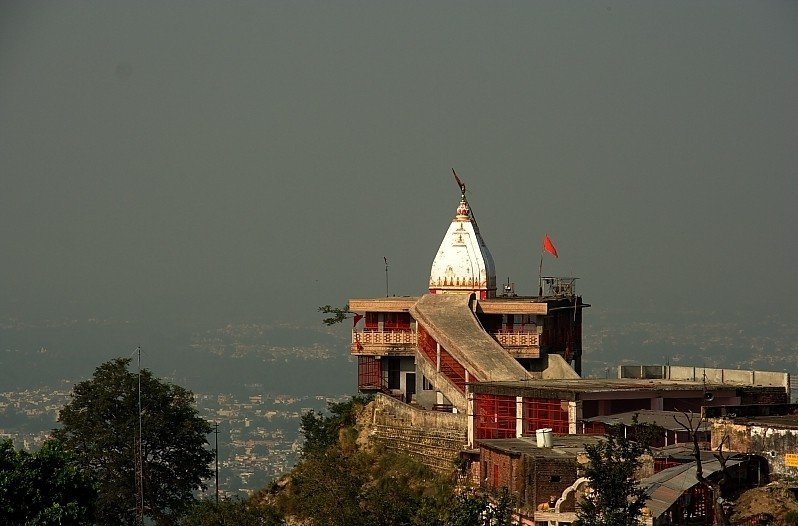 At a distance of 5 km from Haridwar Junction Railway Station, Chandi Devi Temple is one of the famous temples situated atop the Neel Parvat on the Eastern summit of the Shivalik Hills in Haridwar at an altitude of 2,900 m.

This temple is dedicated to Goddess Chandi Devi, an incarnation of Goddess Parvati. This is one of the most famous temples of India. This Temple is highly revered by devotees as a Siddh Peetha which is a place of worship where desires get fulfilled. It is one of three such Peethas located in Haridwar, the other two being Mansa Devi Temple and Maya Devi Temple.

Chandi Devi Temple was built in 1929 by Suchat Singh in his reign as the King of Kashmir. However, the main idol of Chandi Devi at the temple is said to have been installed in the 8th century by Adi Shankaracharya. The temple, also known as Neel Parvat Teerth, is one of the Panch Tirth located within Haridwar.

According to legend, the kingdom of Lord Indra was taken over by two demon kings named Shumbh and Nishumbh. These demons had begun to throw away gods from heaven. After intense prayers by the gods, Parvati assumed the form of Chandi, an exceptionally beautiful woman and amazed by her beauty, Shumbh desired to marry her. On being refused, Shumbh sent his demon chiefs Chanda and Munda to kill her. They were killed by goddess Chamundi who originated out of Chandi's anger. Shumbh and Nishumbh then collectively tried to kill Chandi but were instead slain by the goddess. Thereafter, Goddess Chandi is said to have rested for a short while at the top of Neel Parvat and later a temple was built here to testify the legend. Also, the two peaks located in the mountain range are called Shumbh and Nishumbh.

Thousands of devotees flock to the temple, especially during the festivals of Chandi Chaudas, Navratra and the Kumbha Mela in Haridwar, to seek the blessings of the goddesses. Very near to the Chandi Devi Temple, the temple of Anjana, mother of the monkey-god Hanuman is located. Neeleshwar Temple is also situated at the foot of the Neel Parvat.

To reach the temple one has to either trek for 3 km from Chandighat or take a recently introduced rope-way service. The rope-way carries the pilgrims from the lower station located near Gauri Shankar Temple on the Nazibabad Road directly to the Chandi Devi Temple.