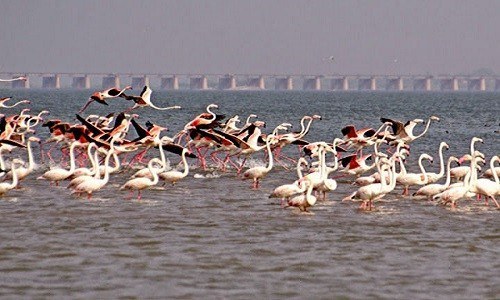 At a distance of 3.5 km from Haridwar Junction Railway Station, Neel Dhara Pakshi Vihar is a famous bird watching point situated at the Bhimgoda Barrage of Haridwar. The Bhimgoda Barrage is on the Ganges River near Har-Ki-Pauri Ghat. The barrage was originally built to aid irrigation but it also generates hydro-electric power and controls floods. The area behind the barrage is known as Neel Dhara Pakshi Vihar. The place is quite popular among bird loving tourists.

The place is known for Siberian Cranes that can be spotted during the winter months at Laljiwala. In addition, the place is also a natural habitat of different species of migratory birds. Not only avid bird watchers, but the spot also welcomes a good number of nature lovers and trekkers. Also, the spot of Neel Dhara Pakshi Vihar is visited by trekkers as it is situated close to many trekking routes in Haridwar.

This place is known for its immense natural beauty. Visitors can also see the Shivalik Hills from the bird watching point and enjoy the sight of the snow covered mountains.