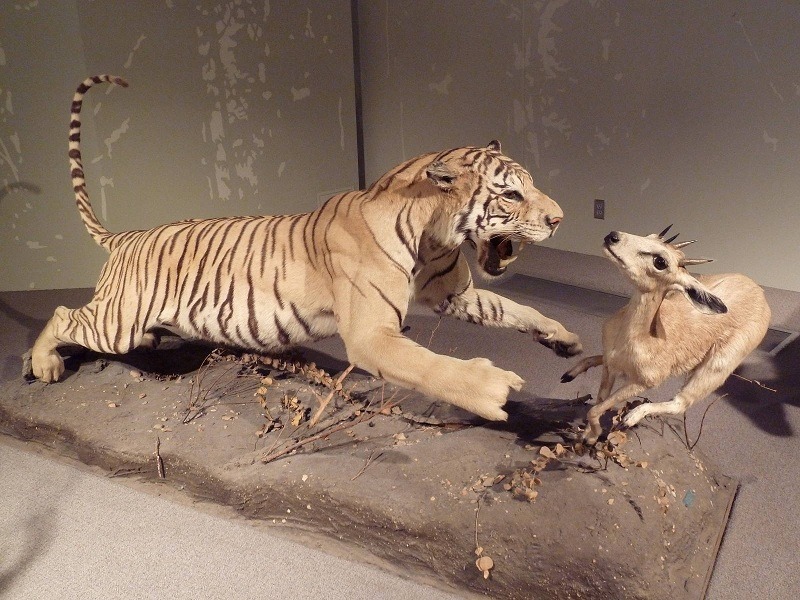 At a distance of 3 km from Darjeeling Himalayan Railway, Bengal Natural History Museum is a museum situated in Darjeeling town of West Bengal. Located inside Padmaja Naidu Himalayan Zoological Park complex, it is one of the best places to visit in Darjeeling.

The Bengal Natural History Museum was established in 1903 at the behest of the then Governor General of India Mr. George Nathaniel Curzon. Established as a small museum within the premises of the Lloyd Botanical Garden, it provides visitors with a wonderful view of rich flora and fauna of Darjeeling and its surrounding areas. However, due to the growing visitors and increasing collection, the museum was shifted to its current location in the year 1915, and the Bengal Natural History Museum was officially formed in the year 1923. Initially the museum was run by Bengal Natural Museum Society from 1923 to 1976 and later it was handed over to the Forest Department of West Bengal.

The Bengal Natural History Museum is a visual delight for nature lovers as it contains an exhaustive collection of almost 4300 specimens, including rare reptiles, birds, insects, fishes as well as mammals. All these specimens are of real creatures that were captured and preserved. The butterfly and beetle section merits special mention. Specimens of estuarine crocodile are also seen here.

There are two sections of the museum, one at the ground level and the other at the basement. The first section at the ground level is that of birds. One can spot specimens like Himalayan Brown Wood Owls, Northern spotted owlet, Northern Brown Fish Owl, pheasants, fly catchers, woodpeckers and lot more. There are over 820 specimens of birds belonging to more than 400 species of the area. There are only two foreign species that have been given as gifts to the museum. There are also a huge collection of birds' nests and their eggs in the museum. They are all placed in natural settings on the tree branches. Also, one can see the different kinds of animals on display like Tibetan fox, Tibetan Lynx, Toddy cat, heads of wild buffaloes hanging from the walls, panthers or leopards. There are various types of butterflies, moths, dragonflies and beetles which were displayed in glass cabinets.

The basement has many types of birds like pelicans, jungle fowls and others against various land features of West Bengal. The Bengal Natural History Museum houses a wide collection of Himalayan fauna. There is also a small library in the Museum building and houses with many rare and valuable books including 125 volume series of 'The fauna of British India'.

Timings: 9 AM to 5 PM, closed on Thursdays and on National Holidays