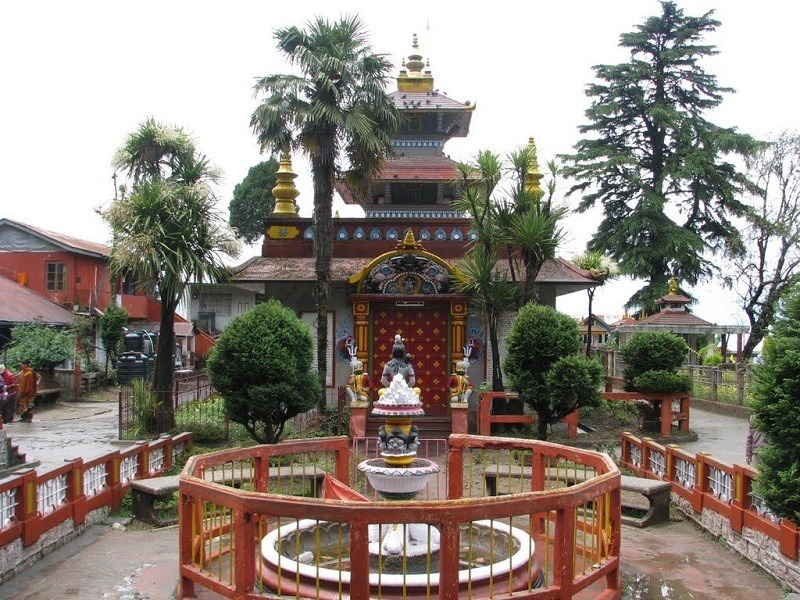 At a distance of 100 m from Darjeeling Railway Station, Dhirdham Temple is the most popular Hindu shrine located in Darjeeling town of West Bengal. It is one of the oldest temples in Darjeeling and among the beautiful Places to visit in Darjeeling.

Dedicated to Lord Shiva, Dhirdham Temple was built by Purna Bahadur Pradhan, the king of Nepal, in 1939. Situated just below the Toy Train Station, the temple was designed by the Gorkhali architect Beg Raj Sakya. Dhirdham Temple appears as a multi-layered pagoda from outside and resembles the Pashupatinath Temple of Katmandu in architecture. The roof of the temple is influenced by Tibetan monasteries.

The temple looks phenomenal in its Tibetan Style structure painted in vivid colours like red, yellow and white. It has a white coloured statue of Lord Shiva near the entrance. This idol symbolises Pancha Bakram Trinetram, which is a depiction of five varied facial expressions of Lord Shiva and His supremely powerful third eye. One can see a vast expanse of hills, green valleys and captivating view of the sun setting behind the Kanchenjunga range from the temple.

The temple serves as a special attraction in the month of February and March when the festival of Shivratri is celebrated with great pomp and fervor.