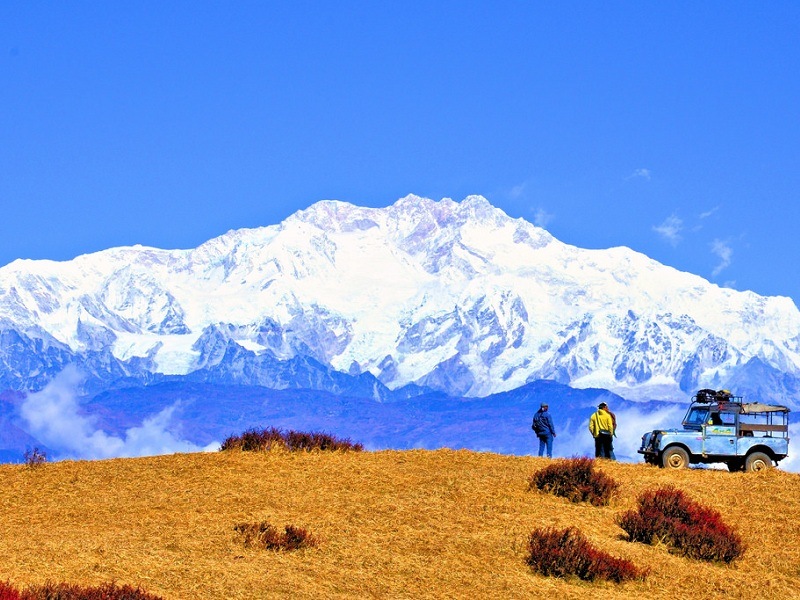 Place Location: On The Border Of India & Nepal

At a distance of 83 km from Darjeeling, Sandakfu or Sandakphu is the highest peak of West Bengal situated on the border of West Bengal of India and Nepal. Sandakphu is one of the wonderful places to experience Darjeeling Tourism and also among the best trekking places in Eastern Himalayas.

Situated at an altitude of 11,941 feet, Sandakphu is the summit or the highest point in Singalila range. Sandakphu means 'Height of the Poison Plant' derives its name from the poisonous plants that grow near the top. Popularly known as 'Trekkers Wonderland', the Sandakphu trek route goes all along the Singalila range and the border of India and Nepal. Also known as Singalila trek, it is considered as the highest trek in West Bengal.

A trek to Sandakphu is actually considered a soft or a light trek in trekker's world. However the altitude, weather conditions and various other factors do require that take adequate preparations, particularly first time trekkers. The Sandakphu trek starts from an altitude of 1,524 m and gradually climbs up through forests of rhododendron, giant magnolias, spruce and other trees of sub-alpine region and more than 600 varieties of orchids. One can get the magnificent views of the Mt. Everest, Kanchenjunga, Lhotse, and Makalu while trekking to Sandakphu.

A round trip trek to Sandakphu takes a total of 4-5 days which is of 32 km from Maneybhanjang. One need to take a permit from the Forest Department located by the roadside just before the steep uphill route starts from Maneybhanjang. It is mandatory that you take a guide and optionally porters for trek to Sandakphu and Phalut. Maneybhanjang to Meghma (9 km) is a steep climb and one needs to trek another 2 km to reach Tonglu. There is a Trekkers Hut at Tonglu.

Tonglu to Tumling (2 km) and then to Gairibas (7 km) is a gradual descent making an easy route for the trekkers. There is a trekkers hut at Gairibas. Gairibas to Kalipokhri is a continuous 6 km climb through the rhododendron forest. There is a small pond at Kalipokhri called 'Black pond' which never freezes. It is believed that Nepalese worship the black lake and no one is allowed to take a swim or a dip in this lake. From Kalipokhri, the road descends to Bikhaybhanjyang which is a 6 km steep climb till Sandakphu. From Sandakphu, one can either return by the same route or take an alternative route that passes through via Gurdum, Srikhola and then finally to Rimbik where one can take a shared or a private taxi to reach Darjeeling.

Phalut is one of the loftiest peaks in the Singalila Range situated close to 12000 feet and is just 21 km away from Sandakphu and 53 km from Maneybhanjang. The Phalut top is try junction of Nepal, Sikkim and India. The word Phalut is derived from the Lepcha word Fak-Luk, means 'Barren Peak'. The area and even the last stretch to Phalut are actually quite barren.

The trek from Sandakphu to Phalut has a relatively easier gradient as both the places are at similar altitudes; however it needs 2 more days. A walk of about 5 hours from Sandakphu the trekker will come across a place known as Sabarkum, which is about 14 km from Sandakphu. There is a forest hut at Sabarkum where one can plan to stay for the night. Phalut is another 7 km away and should take another 2.5 hours to reach.

There is a Trekkers Hut at Phalut. One can rewarded with awesome view of some of the highest peaks of the world including the Everest group, Kanchenjunga, Chamolhari, Pandim, Three Sisters and lot others from Phalut. The most popular return trek route from Phalut is via Gorkhey, Rammam, Srikhola and Rimbik. The trail from Phalut to Gorkhey is about 15 km and it takes 5 hours. Note that at some places the downhill trail is quite steep and could be slippery. Many trekkers prefer to stay at Gorkhey overnight just to enjoy the sheer scenic beauty and serenity of the place. From Gorkhey, the route passes through via Rammam (9 km), Srikhola (12 km) and then finally to Rimbik (7 km) where one can take a shared or a private taxi to reach Darjeeling.