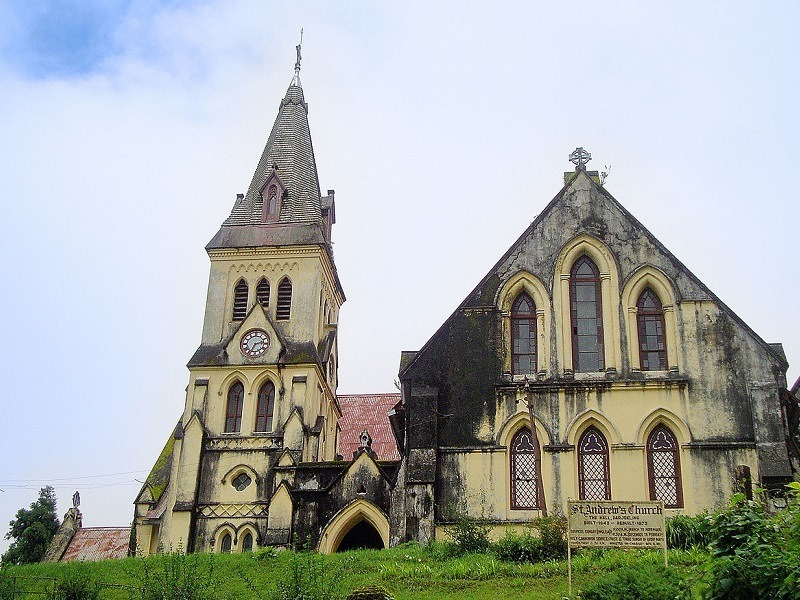 At a distance of 1.5 km from Darjeeling Himalayan Railway Station, St. Andrew's Church is an old Anglican Church located at the Mall Road in Darjeeling town of West Bengal. It is one of the most beautiful structure in Darjeeling and also one of the popular pilgrimage places to visit in Darjeeling.

Named after the patron saint of Scotland St. Andrew, the foundation stone of the church was laid by the British in 1843 CE and was completed in 1844. The church was badly damaged by an earthquake and had to be rebuilt in the year 1873. The early worshippers of this church included many Scottish soldiers and tea planters living in the Darjeeling Hill area. The church is able to accommodate the congregation of about 200 persons.

The church was built in Gothic Style of architecture which is one of the signature styles of British architecture. The origin of this architecture is believed to date back to 12th century AD. Some of its characteristics include the pointed arch, the ribbed vault and the flying buttress, most of which is found in the St. Andrew's Church. The ambience inside the church is very spiritual, ethereal and quiet.

Inside the church there are inlaid marble tablets and brass plaques that memorialize some of the oldest residents of Darjeeling. One of the most prominent figures of those is Lt. General Lloyd who was known as the 'Discoverer' of Darjeeling. There is also a small brass plaque in memory of Charlotte Countess Canning who was the wife of the Governor General of that time of the Mutiny or the First War of Independence. The clock tower was built in the year 1883.

March to November: 9 AM on every Sunday

December to February: 9.30 AM on every Sunday