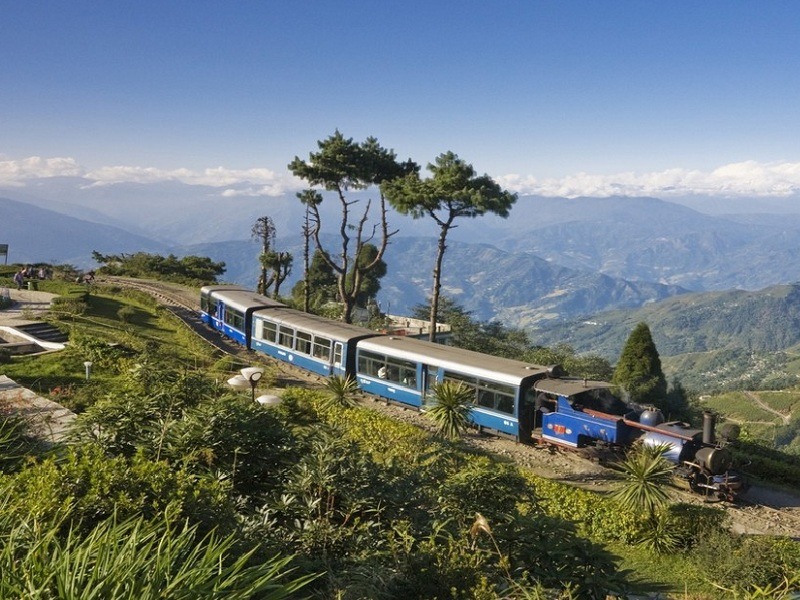 #3 of 28 Places to Visit in Darjeeling

Built between 1879 & 1881, the narrow gauge Darjeeling Himalayan Railway was designed as an extension of the North Bengal State Railway. Running up to a height of over 7,000 feet, the Darjeeling Himalayan Railway is one of the oldest and highest railway lines in the world. The Toy Train begins its journey from Siliguri and reaches Darjeeling after covering a distance of 78 km and crossing 13 stations on its way, including Ghoom, the highest station in India.

The Darjeeling Himalayan Railway, a UNESCO World Heritage, still operates with the original steam engines and it attracts tourists not only from India but around the world. The loops along the route are all remarkable feats of human endeavor and engineering. The entire circuit is filled with scenic views and loops where the train turns around 360°, offer a panoramic view of the hills, making it one of the best train trips in India.

The pace of the train is so slow that local children often hop and off the moving train. Modern diesel engines that are now used are however faster and more powerful. Besides its regular passenger service to/from Kurseong, there are steam-powered joy rides during high season. The joy ride is a two-hour round trip which starts from Darjeeling up to Ghoom and back that covers a total distance of 14 km. The train stops for 10 minutes at Batasia Loop, where it makes a loop around a beautiful and well-maintained garden. From here, one can easily get a bird's eye view of the Darjeeling town, and the snow-capped Kanchenjunga. There is a DHR Museum located at Ghoom station where train stops for 30 minutes to visit the museum.

Visitors can choose a steam engine train or one that has a diesel engine. The steam engine train offers an authentic and traditional experience but is costlier than the diesel engine train rides. The process of booking a seat in Darjeeling Himalayan Railway railways is similar to that of any other train. One can book tickets either online through the Indian Railway's official website, or at any computerized reservation counter.

Darjeeling to New Jalpaiguri: Rs. 1285 per Person for First Class