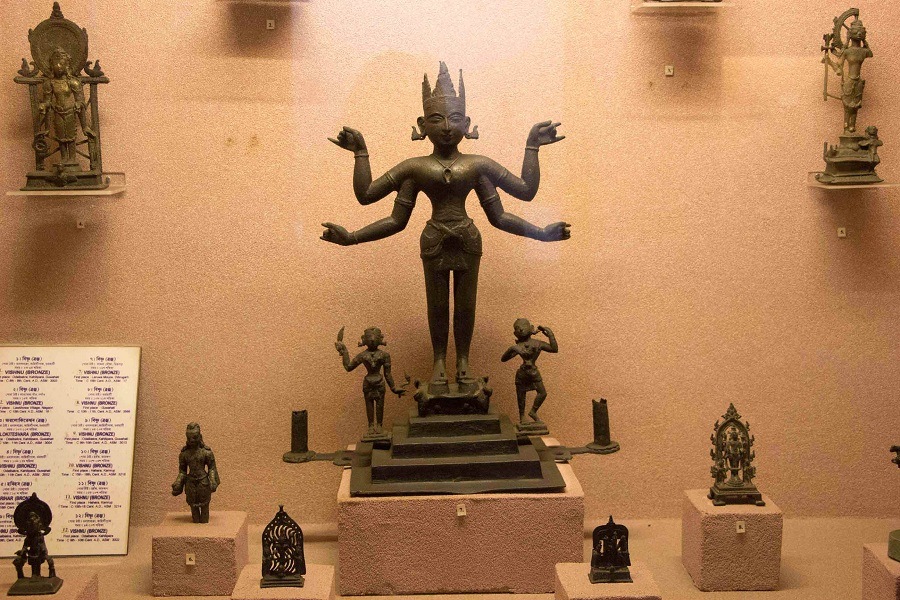 At a distance of 1 km from Guwahati Railway Station, Assam State Museum is a museum located at the southern end of Dighalipukhuri tank in Guwahati, Assam. Also known as Assam Rajyik State Museum, it is one of the popular museums of North East India and among the best places to visit in Guwahati.

The Museum was established as a non-government body by the Kamarupa Anusandhan Samiti (Assam Research Society) in 1940. The museum was developed under the presidency of Kanklal Baruah and it was taken over by State Government soon after his death in the year 1953. The museum offers an insight into the rich culture and heritage of North East India. The Assam State Museum has a huge collection of antiques dating back to the prehistoric times.

The museum features several sections such as Epigraphy, Sculptures, Miscellaneous, Natural History, Crafts, Anthropology & Folk Art & Arms section. The Manuscript section displays the ancient manuscripts such as Assamese, Tai, and Myanmarese. Arms and Ammunition section has a vast collection of the swords, armors from the Medieval period to the Mughal period. It also houses the collection of ammunition from the World War II and the arms of the Ahom dynasty. Sculptors from the Indus Valley civilization and the various terracotta objects extracted from the different parts of North East India are displayed in the prehistoric Terracotta section. The Sculptures section has a collection of metal relics of Vishnu, Goddess Durga, and Buddha along with the collection of coins from Mughal and Ahom dynasty.

Epigraphy section has a collection of stone and copper inscriptions belonging to 5-18th century. Natural History gallery has the collection of natural biodiversity of the state including the life of one-horn rhino. The museum has also put on display the various handicrafts and handmade objects of the North-east India along with the reconstructed tribal huts. There are also weaving and musical instruments on display. The library in Assam State Museum was established in 1985 and is rich in its stenographic collections. There are various periodicals, journals and books relating to art, culture, mythology, biography, encyclopedic works and even the Asiatic Society journals of the country.