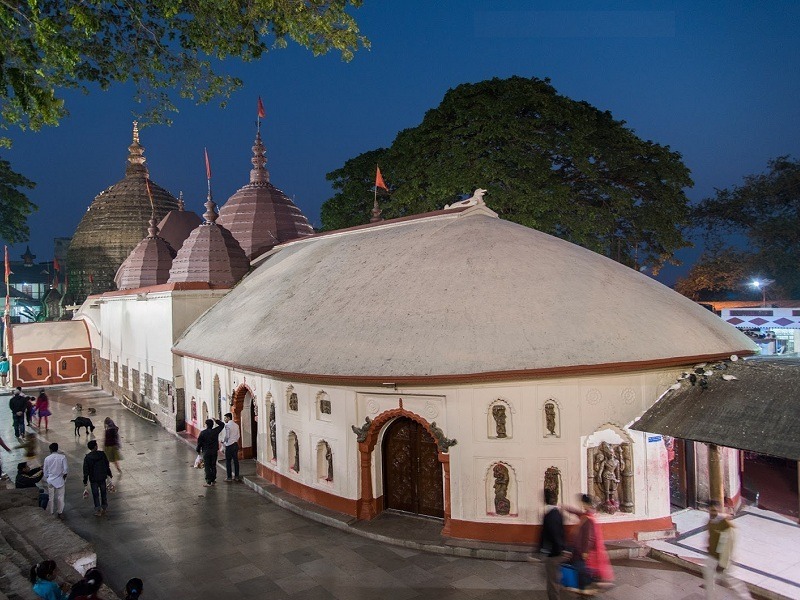 At a distance of 9 km from Guwahati Railway Station, the Kamakhya Temple is an ancient Hindu temple located atop Nilachal hill in Guwahati city of Assam, India. Also called Kamrup-Kamakhya, it is one of the most sacred places of Pilgrimage in India and among the top places to visit in Guwahati.

Dedicated to mother goddess Kamakhya, the Kamakhya temple is considered as the most sacred and oldest of the 51 Shakti Peethas on earth. Also revered as 'Bleeding Goddess', it is one of the most revered shrines of Shakti in India and is also an important pilgrimage destination for Hindus, especially for Tantric worshipers. According to mythology, Kamakhya Temple denotes the spot where the yoni of Goddess Sati fell after Shiva danced with her corpse. It is a part of the four most important Shakti Peethas, the other being the Vimala Temple in Puri, Sthana Khanda in Brahmapur, Odisha and Dakhina Kalika in Kolkata, West Bengal.

The temple was built during the Mleccha dynasty in 8th-9th century. Later, the Kamarupa Kings from Indra Pala to Dharma Pala were the followers of the Tantric cult and from that period, Kamakhya had become an important seat of Tantrikism. The temple was destroyed during Hussain Sha's invasion of the Kamata kingdom in 1498 CE. The ruins of the temple were discovered by Vishwasingha (1515-1540), the founder of the Koch dynasty, who revived worship at the site. But, the temple was reconstructed in 1565 during the reign of his son and was further built over to its present structure by the rulers of the Ahom kingdom.

The current structure has a beehive-like shikhara with delightful sculptured panels and images of Ganesha and other Hindu gods and goddesses on the outside. Kamakhya Temple complex consists of about 20 temples - the largest and most visited being the temple of Goddess Kamakhya. The temple comprises of four chambers which include one garbhagriha and three mandapas. The garbhagriha is a small, dark cave reached by narrow steep stone steps. Inside the cave there is a yoni-shaped cleft in the bedrock which is constantly filled with water from an underground perennial spring. It is the vulva-shaped depression that is worshiped as the goddess Kamakhya herself.

Apart from main temple, there are also the temples of 10 Mahavidyas which includes Bhuvaneswari, Bagalamukhi, Chinnamasta,Tripura Sundari, Tara, Kali, Bhairavi, Dhumavati, Matangi and Kamala Temples. Among these, Tripura Sundari, Matangi and Kamala reside inside the main temple whereas the other seven are individual temples located on Nilachal Hills. Sacrifice of animals such as buffalos, goats, monkeys, tortoises, and pigeons (all male and preferably black) is done inside the temple complex to satisfy Goddess Kamakhya.

Ambubachi Mela or Amoti is the most important festival of Kamakhya Temple held every year in the month of June. It is believed that, Devi Kamakhya goes through her annual cycle of menstruation. The temple door remains closed for 3 days during this time and opened with great festivity on the fourth day. At this time, the Brahmaputra River near the temple turns red. This grand festival attracts large number of devotees from all over the country.