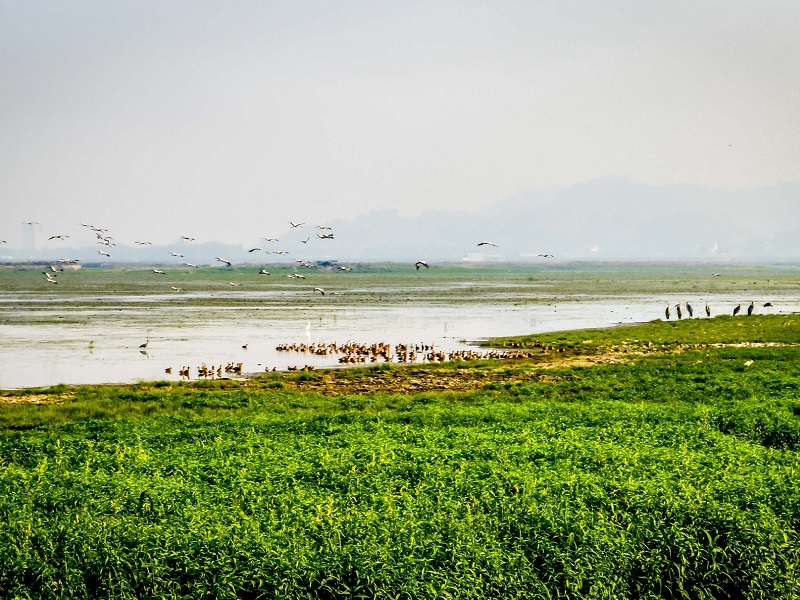 At a distance of 18 km from Guwahati Railway Station, Deepor Beel is a fresh water lake situated to the south-west of Guwahati city in Assam state. Also spelt as Dipor Bil, it is considered as one of the largest lakes in the Brahmaputra valley of Western Assam and among the picturesque places to visit in Guwahati.

Deepor Beel or Dipor Bil is a permanent freshwater lake, which is the erstwhile water channel of River Brahmaputra. Dipor Bil has a total area of 40 Sq. Km of which 4.14 Sq. Km declared as a Bird Sanctuary by Assam Government in 1989. In November 2002, it was listed as a Ramsar site due to its rich wetland biodiversity. Again, considering the varieties of bird species found in the beel, Birdlife International has also declared Dipor Bil as an Important Bird Area (IBA). It is claimed that Beel was an important dockyard of the TaiAhom as well as the Mughals.

In Assamese language, Beel means a huge lake and it is known to be one of the largest Beels in the Brahmaputra valley of Lower Assam area under the Burma Monsoon Forest biogeography region. The depth of the lake is varied from 1 m - 4 m. Basistha & Kalmini Rivers fed this beautiful lake and it drains into Brahmaputra River through the Khonajan channel. The Beel is a source of livelihood for 14 indigenous villages around it whose fishermen depend on it. Freshwater fish is a vital protein and source of income for these communities.

Ornithologists have recorded about 219 species of birds that can be seen in the Deepor Beel area and this includes over 70 species of migratory birds. The most notable bird species found in the sanctuary are Kingfishers, Fishing eagles, a plethora of ducks, Greater Adjutant Stork, Whistling Teal, Open Billed Stork, Shoveler, Pintail, Garganey and high concentration of Pheasant tail jacanas etc. Deepor Beel is also home to around 12 lizard species, 20 kinds of amphibians, 6 tortoise and turtle species, along with 18 species of snakes. The diversity & concentration of indigenous fresh water fish species is very high in Dipor Bil.

There is a watch tower inside the sanctuary, constructed by the forest department. Also, country boats are available to watch the birds. October to March is the best season to visit this place.