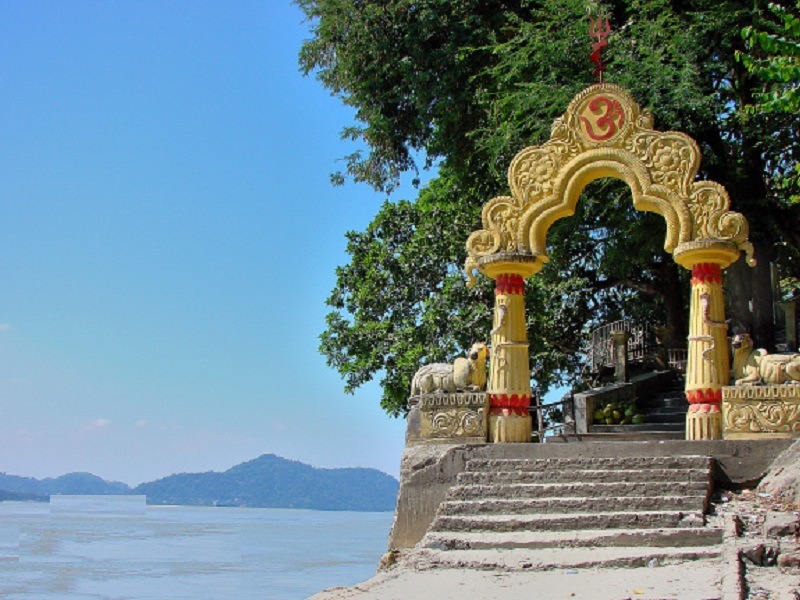 At a distance of 3 km from Guwahati Railway Station, Umananda Temple is a prominent Hindu temple located on Peacock Island in the middle of mighty Brahmaputra River in Guwahati city of Assam. It is one of popular temples in Assam and among the top places to visit in Guwahati.

Placed atop the Bhasmakuta or Bhasmachala Hill, the temple is dedicated to Lord Shiva and is the most revered temple in the entire state of Assam. The Umananda Temple was built in 1694 AD by Borphukan Garhganya Handique on the order of the King Gadadhar Singha who was one of the strongest rulers of Ahom dynasty. A devastating earthquake destroyed the original temple in 1897 and was later rebuilt by a rich merchant who was a devotee of Lord Shiva.

Legend says that, Lord Shiva resided on this island as Bhayananda. It is said that at the beginning of creation, Lord Shiva sprinkled ashes here and imparted the supreme knowledge to his wife, Parvati. Another legend says that, once Lord Shiva was meditating on this hillock, and he was interrupted by Kamadeva. As a result of this interruption, Kamadeva was burnt to ashes by the fire of Lord Shiva's anger; hence the hillock got the name Bhasmakuta.

The sanctum sanctorum of the temple has a beautiful Shiva Linga. There are plenty of engravings and sculptures of Hindu gods like Surya, Shiva, Ganesha and Devi on the rock walls of the temple. Apart from these, sculptures of Lord Vishnu and his ten incarnations can also be found in the vicinity of this temple. There is a Hanuman Temple besides the main temple on the island. One can also visit Urvasi Island situated nearby where the goddess Urvasi, who brings Amrit (nectar) for the enjoyment of Kamakhya, resided once.

The Umananda Temple is nestled in the lap of serene Peacock Island whose shores are washed by the mighty Brahmaputra. The Peacock Island is the smallest inhabited riverine in the world and possibly one of the most beautiful too. The only way to reach this temple is to board ferries and motor launches available at the Umananda Ghat. Then, there is a small climb of 100 steps to reach the temple.

Maha Shivaratri is the major festival celebrated in this temple with great pomp which attracts large number of devotees. According to a popular belief, it is said that worshipping here on an Amavasya day, especially falling on Monday, brings highest bliss to the worshippers.