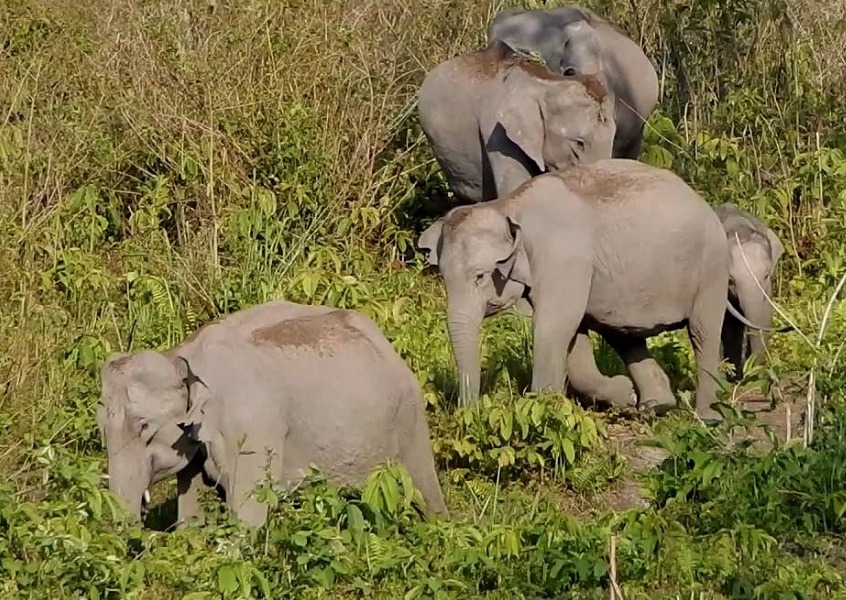 Travel Tips: The park remains closed from June to September and Park remains open partially on the months from May & October.

At a distance of 134 km from Guwahati Railway Station, Manas National Park is a national park situated at the Himalayan foothills of Assam in India. Also called as Manas Wildlife Sanctuary, it is one of the best wildlife sanctuaries in Assam and among the nine tiger reserves in India.

Manas National Park is a national park, UNESCO Natural World Heritage site, a Project Tiger reserve, an elephant reserve and a biosphere reserve in Assam, India. It is contiguous with the Royal Manas National Park in Bhutan. The name of the park is originated from the Manas River, which is named after the serpent goddess Manasa. The Manas River is a major tributary of Brahmaputra River, which passes through the heart of the national park. The park is divided into three ranges. The western range is based at Panbari, the central at Basbari near Barpeta Road, and the eastern at Bhuiyapara near Pathsala.

Earlier, the park was the hunting ground for the Cooch Behar Royal family and Raja of Gauripur. Manas was proposed a Reserve Forest in 1905, and declared a Reserve Forest in 1907. In 1928, it was declared a Game Sanctuary. With an area of 350 Sq. km, Manas Game Sanctuary was declared as a Wildlife Sanctuary in 1950. In 1973, it was declared as Tiger Reserve under Project Tiger and was declared as World Heritage Site by UNESCO in 1985. In 1989, Manas acquired the status of a Biosphere reserve. Extends over an area of 2837 Sq. km with a core area of 500 Sq. km, the park got the National Park status in 1990. In 1992, UNESCO declared it as a world heritage site in danger due to heavy poaching and terrorist activities. In 2003, Manas was declared as Chirang - Ripu Elephant Reserve under Project Elephant. It was removed from the List of World Heritage in Danger in 2011 and was praised for its efforts in preservation.

The park is known for its rare and endangered endemic wildlife. Manas is famous for its population of the wild water buffalo, rare golden langur and the red panda. The park is also home to some of the rare wildlife species including one horned rhinos, leopards, clouded leopards and the amazing black panthers. Apart from the wild beasts, there are nearly 60 mammal species, 42 reptile species, 7 amphibians and 500 species of birds, of which 26 are globally threatened. Manas is recognized not only for its rich biodiversity, but also for its spectacular scenery and natural landscape which includes a range of forested hills, sedimentary grasslands and tropical evergreen forests.

The entry point to the Manas National Park is from the Manas Basbari Forest Range Office where one can take the tickets to enter the park. The activities included in this park are Elephant Ride, Jeep Safari and River Rafting. Forest officials arrange rides on elephants from Mathanguri. One can easily spot rhinos and tigers while sitting on an elephant. There are many options available for the stay. Forest rest houses in Bansbari and Mathanguri and traditional cottages in Kokilabari can be chosen to stay. Besides, several other staying options are available along Barpeta Road on the outskirts of the park.

The best time to visit this park is from November to April. The park remains closed from June to September and Park remains open partially on the months from May & October.