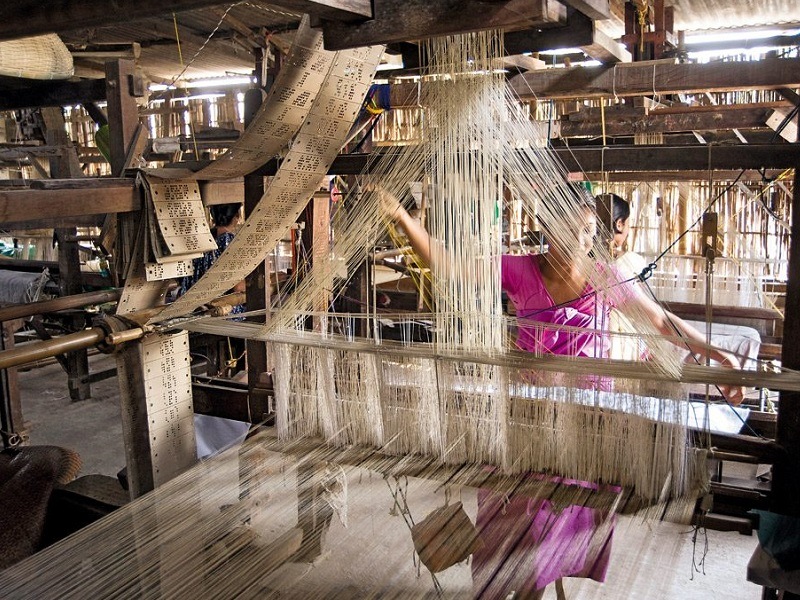 At a distance of 31 km from Guwahati, Sualkuchi is a census town in Kamrup district in the Indian state of Assam. Situated on the banks of River Brahmaputra, it is one of the beautiful places to visit near Guwahati.

Often called as 'Manchester of Assam', Sualkuchi is one of the largest weaving villages in the world as it has large number of cottage handloom industries. The weaving tradition in this hamlet was started in 11th century when king Dharma Pal of the Pala dynasty, sponsored the craft and brought 26 weaving families from Tantikuchi to Sualkuchi. Later, Sualkuchi emerged as a complete silk weaving town by the 17th century AD under the rule of Ahom kings.

This picturesque village is a haven for silk fabrics ranging from the golden Muga to the ivory white 'Pat' and the light beige 'Eri' or 'Endi' silks. Out of which, Muga & Eri, also known as Ahimsa Silk are native only to Assam. The village has around 30,000 functional weaving looms, and holds the record of producing nearly six million meters of Pat and Muga Silk annually. Every house has atleast one adept hand called the Xipini, who is the main weaver of the house.

It is also successfully producing traditional Khasi silk textile for ages. The annual trade of the traditional Khasi dresses made of mulberry silk in this silk village now runs into several crores. The village exports raw silk as well as finished products to the rest of the country and abroad. The weavers are also efficient in taking personal orders and dispatching them in minimal cost to the customers. The streets of Sualkuchi are lined by numerous silk shops, selling variants of traditional, native silk with the blended ones. People from far corners of the state have thronged the village for their choice of silk products.

Apart from its exquisite collection of silk products, Sualkuchi has also famous for its annual boat race, held in the month of July-August to commemorate the death anniversary of the great poet, Srimanta Sankardeva. Thousands of Hindus and Muslims participate in the race giving profound example of communal harmony and peaceful co-existence.