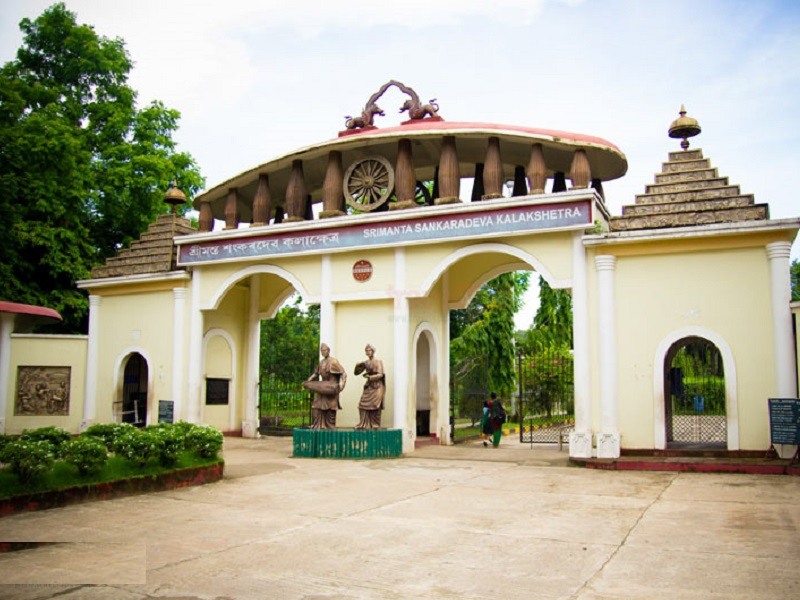 At a distance of 11 km from Guwahati Railway Station, Srimanta Sankardeva Kalakshetra is a non-profit cultural institution in the Panjabari area of Guwahati, Assam. Named after the medieval poet-playwright and reformer Srimanta Sankardeva, it is the largest cultural congregation of the north east India and is also one of the well-known places to visit in Guwahati.

Built in 1990s, the Kalakshetra was built in the memory of Mahapurusha Srimanta Sankardeva and his contribution towards the spiritual and cultural upliftment of Assam and its people. The institution attempts to preserve, restore, and promote the rich cultural heritage of the diverse ethnic communities inhabiting Assam. It is governed by a group of executives, selected by the Assam Government's Cultural Department and is headed by a Director of the Assam Civil Service or Indian Administrative Service cadre.

The Kalakshetra is divided into several complexes which include a cultural museum, a library and a children's recreational park. The main attraction in the Kalakshetra is the central museum that preserves some of the traditional articles or artifacts of Assamese culture. The open-air theater can accommodate 2000 people and hosts cultural programs in its premises. The Kalakshetra also has the Artists' Village, which replicates the village society of Assam. The Sahitya Bhavan is the library in the Kalakshetra, which has a huge collection of rare books and manuscripts. It is a repository of the literature of the region.

Another section of the art complex is the Lalit-Kala Bhavan which displays a world class exhibition of art and sculptures. A heritage park is also a part of the huge complex of the Sankardeva Kalakshetra where a cable car facility is also available inside the park to commute the tourists. Nice view of the hills of Shillong plateau can be seen from the fields of Kalakshetra. The Bhupen Hazarika museum is another attraction of Kalakshetra. There are also eateries, places of worship and emporiums within the sprawling Kalakshetra premises.