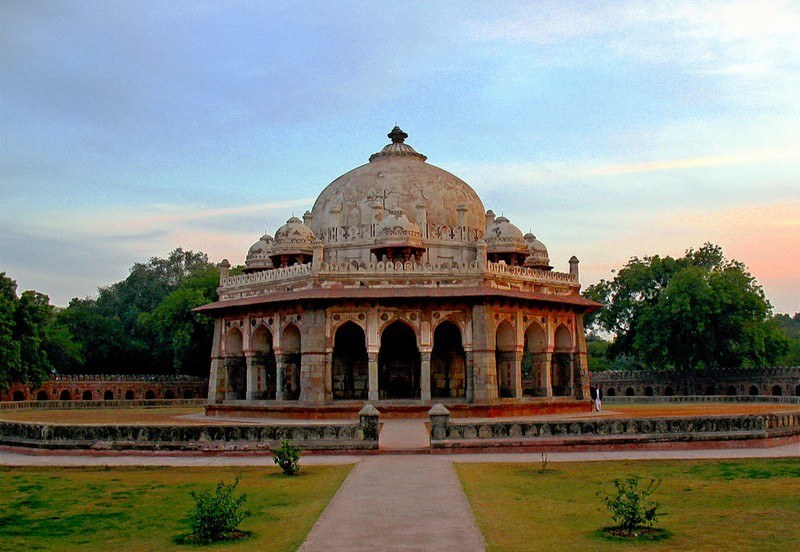 Travel Tips: This place is situated inside Humayun's Tomb Complex and both are visited together

At a distance of 8 km from New Delhi Railway Station and 3 km from Hazrat Nizamuddin Station, Isa Khan's Tomb is situated to the south of Bu Halima's Garden in the Humayun's Tomb Complex.

The octagonal tomb of Isa Khan is located at the centre of an octagonal complex and is surrounded by a beautiful garden. It is believed that Isa Khan's tomb influenced the architecture of Humayun's Tomb. The tomb is surrounded by a wide verandah, approachable by a flight of stairs. Each of the eight sides consists of triple arched entrances, decorated with blue, yellow and green glazed tiles. Each corner of the octagon is marked with slender tapering pillars rising above the roof and giving it a minaret like appearance. The roof containing the huge central dome crowned with an inverted lotus. The roof also contains 8 chattris on each of the 8 sides.

The interior contains six graves, but it is difficult to spot the grave of Isa Khan and nothing much is known about the other five graves. Seven walls of the tomb contain intricate lattice stone work but the Western wall contains a Mihrab. The walls contain fresco work but the highlight of the interiors of Isa Khan's Tomb is the circular fresco on the ceiling.

At the edge of the complex, across from the tomb, lies a mosque known as Isa Khan's Mosque, and was built along with the tomb. The mosque is as old as the tomb and is approached through three arched entrances. Each of the arches is decorated with glazed tiles of blue, green and yellow, along with floral and geometric patterns and calligraphy. The central arch is larger than the two side arches and is much grander and is flanked by red sandstone. The central arch leads to a central chamber with an elaborately decorated Mihrab on the western wall. The central chamber is crowned with a large dome.