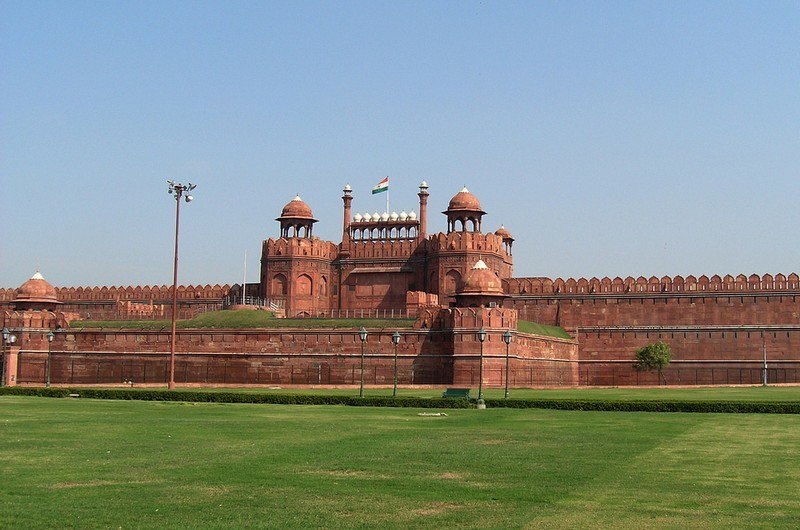 At a distance of 4 km from New Delhi Railway Station, The Red Fort or the Lal Qila is one of the best historical places in Delhi situated on the western bank of the River Yamuna. This grand fort is a UNESCO World Heritage Site in Delhi, from where the prime minister addresses the nation every year on Independence Day (15 August). It is located in the center of Delhi and houses a number of museums. It is one of the best places to visit in Delhi and also one of the top attractions you must include in Golden Triangle tour.

The Red Fort was built by Shah Jahan between 1638 and 1648. The Fort was built when Shah Jahan transferred his capital from Agra to Delhi. The fort is better planned than the Agra Fort and was the residence of the Mughal emperor of India for nearly 200 years, until 1857. It was originally called as Quila-i-Mubarak, meaning the blessed fort, as it was the royal residence of Mughals.

The Fort is enclosed by a rubble stone wall. The walls of the Fort are about 2 kilometers in length while the height varies from 18 m to 33 m, and surrounded by a deep forbidding moat. The structure is in the form of an octagon with long extended walls on the east and west. The Red Fort is constructed out of red sandstone along with marble that has been extensively used in the construction of the palaces within the fort. It has two main gateways, the Lahore Gate and the Delhi Gate.

The entrance is through the Lahore Gate which forms a part of a massive stone fortification and is made up of pink sandstone. The path leads to the Chatta Chowk, also known as Meena bazar which offered exclusive shopping, just for ladies of the fort on Thursdays. At the end of the Chatta Chowk is the Naubat Khana (Drum house) where ceremonial music was played by the musicians to glorify the emperor and special tunes were played to announce the arrival of the royalty and important dignitaries. Just above the Naubat Khana is the Indian War Memorial Museum which has a collection of armours, guns, swords and other items related to war. There is the Swatantra Sangrama Sangrahalaya displaying letters, photos, newspaper cuttings from the India independence struggle.

From Naubat Khana, a path runs east through wide lawns to the Diwan-i-Am (Public Audience hall). In this elegant hall, the Emperor sat daily on a royal marble throne to deal with administrative matters. There is a large formal garden and a row of five small palaces behind the Diwan-i-Am. The palaces were beautifully decorated with silver ceilings ornamented with golden flowers and crowned with gilded turrets, delicately painted and decorated with intricate pieces of mirrors. Between the garden and the palaces there was a stream known as Nahr-i-Bihisht flowing with a network of lotus shaped marble fountains. The palace on the extreme south is the Mumtaz Mahal, now the Red Fort Museum of Archaeology, (Open daily except Fri 9 AM - 5 PM) displaying relics from the Mughal Period including numerous paintings, weapons, textiles, carpets, ornate chess sets, hookahs and metal work.

Close to the Mumtaz Mahal is the Rang Mahal once elaborately painted, where the emperors main wife resided and where the emperor ate most of his meals. The stream ran through the palace and ended in the lotus shaped central pool in the marble floor originally with an ivory fountain in the center. Hundreds of small mirrors were set into the ceilings of apartments on either side known as the Sheesh Mahal (Palace of Mirrors). On the northern side of Rang Mahal, is the Khas Mahal, the exclusive three roomed palace of the emperor. The southern chamber is the Tosh Khana and the north chamber is the Tasbih Khana where the emperor used to worship privately.

The majestic Diwan-i-Khas, made of marble was where the Emperor held private meetings and received important guests seated on his priceless Peacock Throne. It is said that the throne which took 7 years to make, was built out of solid gold embedded with precious stones such as sapphires, rubies, emeralds, pearls and diamonds and had figures of peacocks standing behind. The throne was carried away to Iran by Nadir Shah when he sacked Delhi in 1739. Later it was broken up by Nadir Shah's assassins in 1747.

Close to the Diwan-i-Khas is the Hammams or the Royal Baths, where Emperor's family took perfumed baths. Next to the Hammam lies the Moti Masjid, built in 1662 by Aurangzeb for his personal use. Shahi Burj, the three storied octagonal tower, situated on the northeastern edge of the fort was the emperor's private working place.

Every evening a sound and light show recreates the Red Fort's history. The English sessions are held at 7.30 PM from November through January, at 8.30 PM from February to April and September-October and at 9 PM from May to August.