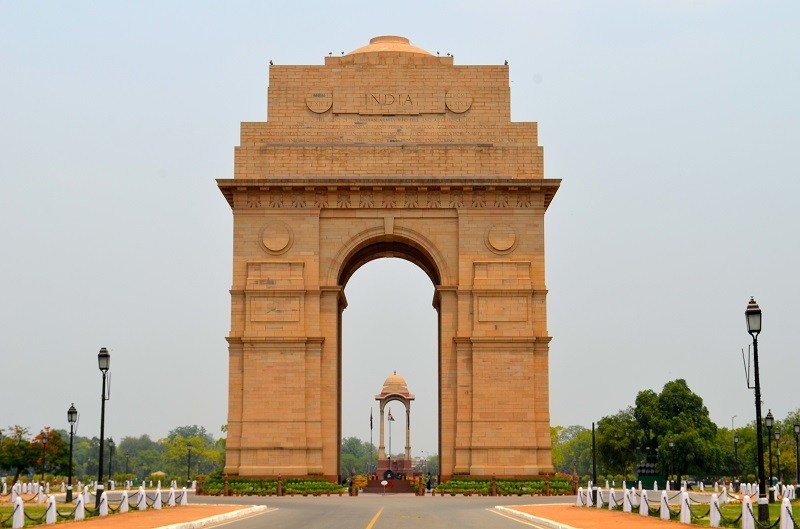 At a distance of 4.5 km from New Delhi Railway Station, India Gate is one of the most popular monuments situated at eastern end of Raj Path in New Delhi. It is also one of the most visited tourist places in Delhi.

India Gate, Originally called the All India War Memorial, is a war memorial in honour of the 70,000 Indian soldiers who died during the World War I. The memorial bears the names of more than 13,516 British and Indian soldiers killed in the Northwestern Frontier in the Afghan war of 1919.

It was designed by the famous British architect, Edward Lutyens and the foundation stone was laid down by the Duke of Connaught in 1921. The monument similar in design to the French war memorial, the Arc-de-Triomphe, was completed in 1931.The monument was dedicated to the nation in 1931 by the then Viceroy, Lord Irwin. Another memorial, Amar Jawan Jyoti was added much later, after India got its independence. The eternal flame burns day and night under the arch to remind the nation of soldiers who laid down their lives in the Indo-Pakistan War of December 1971.

The India Gate reaches up to a height of 42 m and stands tall in the heart of the city with an arched structure. The entire arch stands on a low base of red stone and rises in stages to a huge moulding. The cornice is inscribed with the Imperial suns while both sides of the arch have INDIA, flanked by the dates MCMXIV (1914 left) and MCMXIX (1919 right). The shallow domed bowl at the top was intended to be filled with burning oil on anniversaries but this is rarely used.

India Gate stands at one end of Raj path, Rashtrapati Bhavan (the President's house) is situated at the other end of the Raj path. Surrounding the imposing structure is a large expanse of lush green lawns, which is a popular picnic spot. There is also a small pond nearby where one can enjoy boating as well. At nightfall India Gate is beautifully lit up, including the surrounding fountains. India Gate is also renowned for the grand Indian Republic Day Parade, hosted here every year on 26 January.