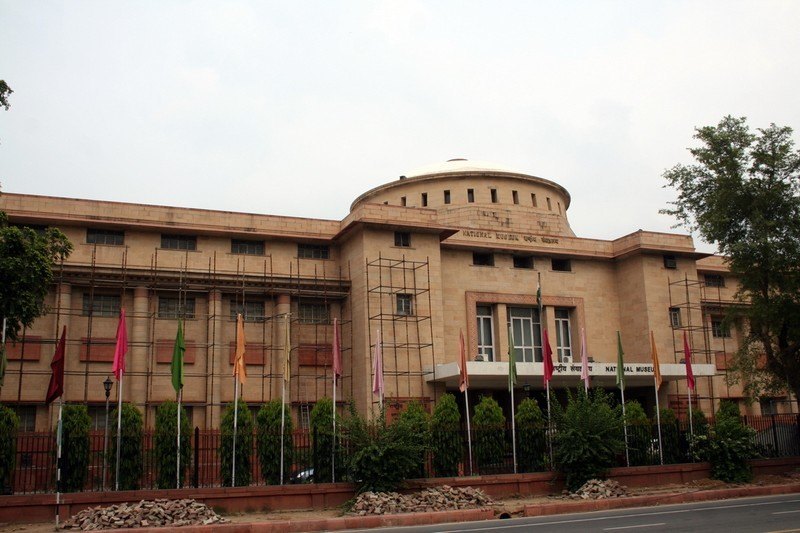 Travel Tips: This place can be visited from India Gate (1 km)

At a distance of 4.5 km from New Delhi Railway Station, The National Museum is located on Janpath close to the road between India Gate and Rashtrapati Bhawan. This museum is managed by the Ministry of Culture and is one of the largest museums in India and among the famous Delhi tourist places.

The National Museum was established on 15th August 1949 and houses artifacts ranging from pre-historic to modern era. The blue-print of the National Museum had been prepared by the Gwyer Committee set up by the Government of India łn 1946.The museum functioned in the Rashtrapati Bhawan during its initial years. The present building was laid by Pandit Jawaharlal Nehru on 12th May, 1955 and it was formally opened to public on 18th December 1960.

There are around 200,000 beautiful artifacts of both Indian as well as international origin housed in the museum. Some of the artifacts are more than 5,000 years old. It has articles from pre-historic era to contemporary art works. One of the popular attractions of the museum is the film shows based on the art heritage of India. The ground floor of the museum comprises of several important galleries.

The exclusive collection at the National Museum covers things like archaeology, arms, armour, decorative arts, jewellery, manuscripts, paintings, and so on. The collection at the Museum include glimpses of Harappan Civilization in a gallery being jointly set by Archaeological Survey of India and the National Museum, which has a collection of different artifacts from the sites of Harappan civilization. The whole collection of this gallery represents the advanced technology and sophisticated lifestyle of the Harappan people.

The National Museum is also home to the National Museum Institute of History of Arts and the Conservation and Museology (now a recognized University). The Archaeological Gallery has a prestigious collection of approximately 800 sculptures. One of the most popular sections of the National Museum is the Buddhist Art section which is home to few beautiful and scared relics of Lord Buddha, found in the Basti District.

There is a separate place dedicated to Indian miniature paintings which belong to styles such as Deccani, Pahari, Central Indian and Rajasthani, dating from 1000 AD to 1900 AD. The theme based paintings beautifully demonstrate the epics like Bhagawatgeeta, Mahabharata, Ramayana, Baramasa, Vishnu Purana and Panchatantra.

Timings: 10 AM to 5 PM, closed on Mondays and public holidays.