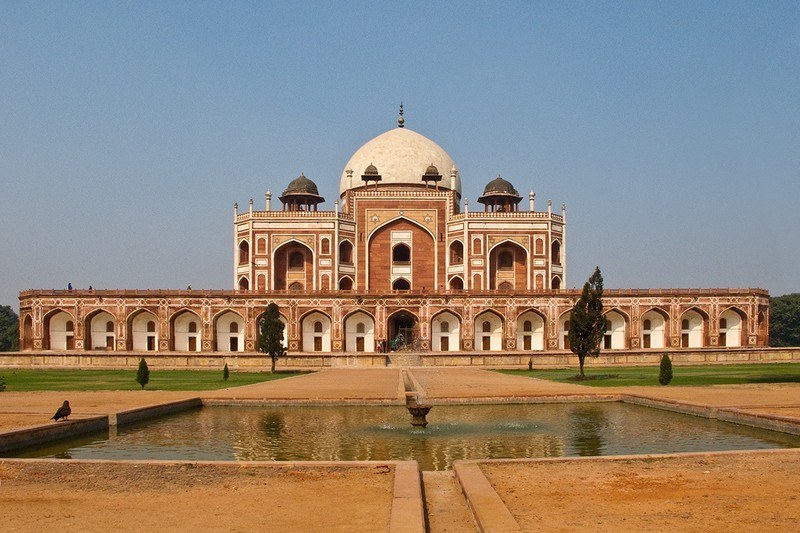 At a distance of 8 km from New Delhi Railway Station and 3 km from Hazrat Nizamuddin Station, Humayun's Tomb is one of the prime tourist places to visit in Delhi and one of the top historical places in Delhi city. The tomb is an UNESCO World Heritage Site. It is the final resting place of Humayun, the second Mughal Emperor and father of Akbar.

The construction of this tomb was commissioned by Humayun's wife, Hamida Banu Begum or Haji Begum in 1562. It was designed by Mirak Mirza Ghiyath, a Persian architect. Humayun's tomb was based on Gur-e Amir, the tomb of Mughal ancestor Timur in Samarkand. The tomb was completed in 1572 AD and is believed to have costed 15 lakh rupees at the time of its completion. The entire structure is built using red sandstone.

Humayun's tomb is a fine specimen of the great Mughal architecture, which was inspired by Persian architecture. The tomb was the first garden-tomb on the Indian subcontinent. Its unique beauty is said to have inspired several major architectural innovations, culminating in the construction of the majestic Taj Mahal.

The tomb is octagonal in shape with two double-storeyed gateways to enter the tomb, one on the west and the other on the south. The southern gateway is currently closed. The tomb has a large pavilion and a bathing chamber. The octagonal central chamber contains the main tomb of Humayun and the diagonal sides lead to corner chambers which house the graves of other members of the royal family. The roof surmounted by a large dome built with marble.

The mausoleum stands in the centre of a 30-acre garden known as the Char Bagh or Four Gardens. The Persian style garden is decorated with several fountains. The complex of Humayun's Tomb consists of many small monuments like tomb of Humayun's wife, tomb of Humayun's barber, Afsarwala tomb and Mosque, Isa Khan Tomb, Bu Halima Garden and Nila Gumbad. This is also the place where the last Mughal emperor, Bahadur Shah Zafar, took refuge before being captured and exiled by the British in 1857.

The tomb of Barber is an impressive square tomb with a double marble dome which is located on the south western region of the tomb and standing on a raised platform. The tomb is datable to 1590-91, through an inscription found inside. The person interned in this tomb is unknown; the local name of the tomb is Barber's Tomb (Nai ka Gumbad). Inside the tomb, there are two graves inscribed with verses from the Quran. On the southeastern region, just outside the enclosure of Humayun's Tomb lies Nila-Gumbad (blue dome). Nila-Gumbad is believed to have been built in 1625 by Abdur-Rahim Khan and is said to contain the remains of Fahim Khan, one of his faithful attendants.