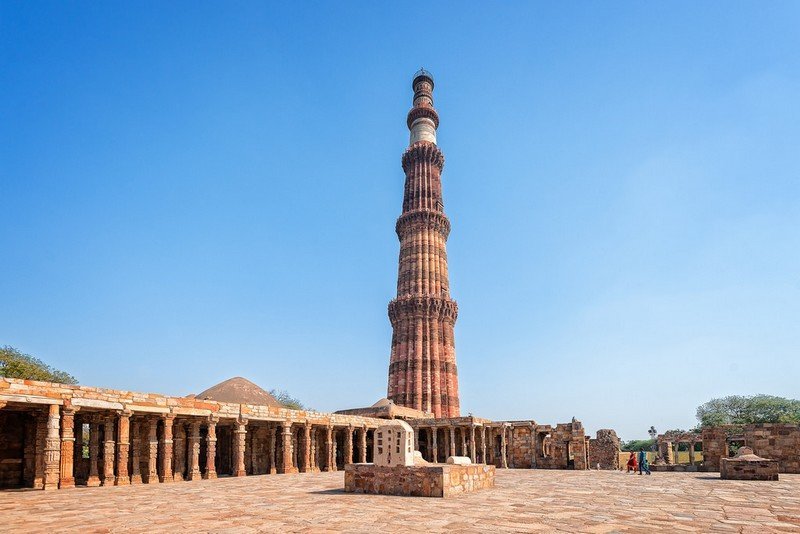 Following places are located inside Qutub Complex and are visited together:

At a distance of 15 km from New Delhi Railway Station, Qutub Minar is the magnificent tower of victory stands in the Qutub Complex located at Aurabindo Marg near Mehrauli in Delhi. Qutub is the highest tower in India and is an UNESCO World Heritage Site. It is among the must visit Delhi tourist places and one of the best heritage sites in Delhi city. It is also commonly featured in the promotion of Delhi Tourism.

Qutub-ud-Din Aibak laid the foundation of Minar in 1199 AD for the use of the Mu'zzin (crier) to give calls for prayer and raised the first storey, to which three more storeys were added by his successor and son-in-law, Shamsud-Din Iltutmish (AD 1211-36). Numerous inscriptions in Arabic and Nagari characters in different places of the Minar reveal the history of Delhi. According to the inscriptions on its surface it was repaired by Firoz Shah Tughlaq (AD 1351-88) and Sikandar Lodi (AD 1489-1517). Major R. Smith also repaired and restored the Minar in 1829.

It is an ideal example of Indo-Islamic architectural style. The minar has a diameter of 14.32 m at the base and about 2.75 m on the top with a height of 72.5 m (234 feet). The first three storeys are made of red sandstone and are heavily indented with different styles of fluting, alternately round and angular on the bottom floor, round on the second and angular on the third. The fourth and fifth floors are made of marble and sandstone. Qutub Minar is one of the tallest individual towers in the world. All the storeys are surrounded by a projected balcony encircling the Minar and supported by stone brackets, which are decorated with honey-comb design. There is a door on the northern side, leading into the tower to a spiral stairway with 379 steps that lead to the balcony in each floor.

At the base of the Minar is the Quwwat-ul-Islam Masjid. It is the earliest extant mosque built by the Delhi Sultans. It consists of a rectangular courtyard with the carved columns and pillars from 27 Hindu and Jain temples which were demolished by Qutub-ud-Din Aibak as recorded in his inscription on the main eastern entrance.

The complex also has a number of other important monuments - the gateway built in 1310, the Alai Minar, Madrasa, the tombs of Iltutmish, Aladdin Khalji and Imam Zamin.