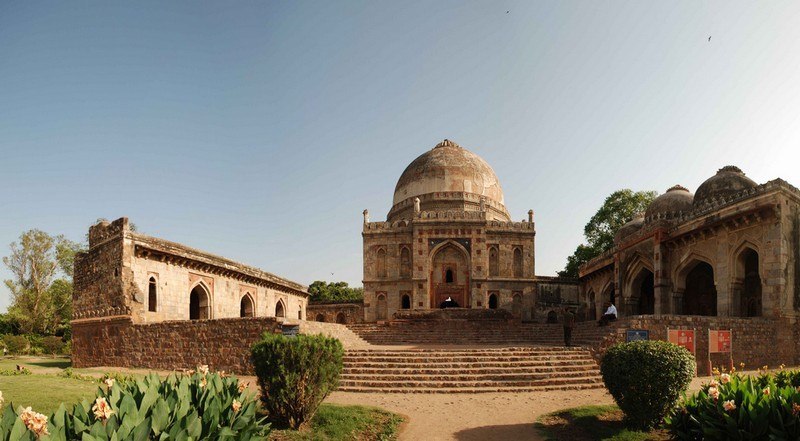 At a distance of 6.5 km from New Delhi Railway Station and 5 km from Hazrat Nizamuddin Station, Lodi Garden is located at Lodi Road. This protected complex encloses several historical monuments including tombs, mosques and a bridge, belonging to the Lodi and Sayyid dynasties. It is one of the popular places to visit in Delhi city.

The beautiful Lodi Garden was built by two Delhi Sultanate dynasties, the Sayyids and Lodis in the 15 and 16th centuries. It was landscaped in 1936 by Lady Willington, wife of Marquees of Willington, Governor-General of India during the British rule. The original name of Lodhi Garden was Lady Willington Park which later renamed as Lodi Garden after Indian Independence in 1947.

The tomb of Mohammed Shah, the last ruler of Sayyid dynasty, was built in 1444 by Aladdin Alam Shah as a tribute to Mohammed Shah. It is the earliest monument built in the complex. The tomb is octagonal in shape with several ornamental Indo-Islamic style chhatris around the central dome. The main tomb is supported by a 16-sided drum. There are eight graves inside, the central one among which is believed to be that of Muhammad Shah.

Another tomb within the gardens is that of Sikander Lodi, which is similar to Mohammed Shah's tomb, though without the chhatris, it was built by his son Ibrahim Lodi in 1517, the last Sultan of Delhi from Lodi dynasty. It is a simple rectangular structure on a high platform approached by a staircase. The tomb was renovated by the British and an inscription mentioning Ibrahim Lodi's defeat at the hands of Babur.

In the middle of the gardens is the Bara Gumbad (Big Dome), it consists of a large rubble-construct dome, adjacent to it is a three domed masjid, both built in 1494 during the reign of Sikander Lodi. Opposite the Bara Gumbad is the Shisha Gumbad known for the glazed tiles used in its construction. Built during the reign of Sikander Lodi, it contains the remains of an unknown family.

Athpula Bridge is a stone bridge with 8 arches built during the sixteenth century. The bridge has seven arches, supported by eight piers and stands over the remains of what was once a tributary of the Yamuna River.

Lodi Garden houses over 7000 trees of several species, each properly labeled. Recently, a Bonsai park was also added to the garden, which boasts of an excellent selection of bonsais and also houses a butterfly conservatory, herbal garden, lily pond and a rose garden. There are few small lakes inside the garden that attract birds like owls, kingfishers, hornbills, kites, mynahs, parakeets and babblers.