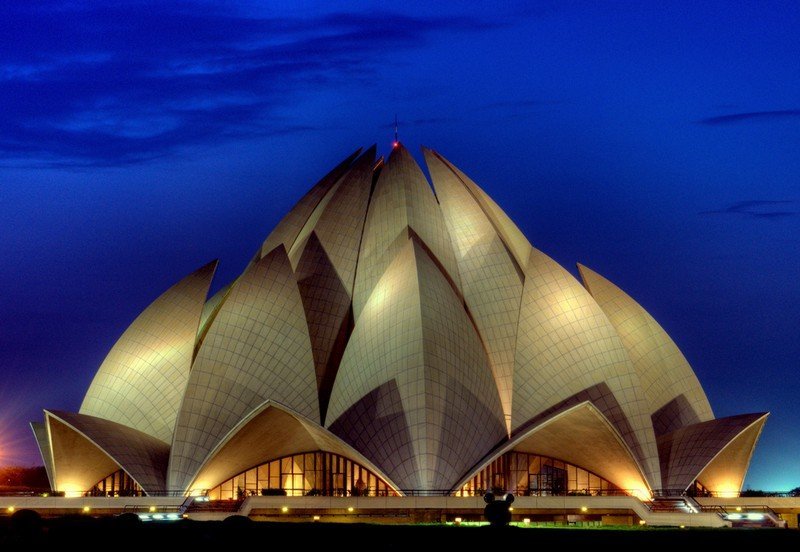 Lotus Temple was found by the believers of the Bahai Faith, an independent world religion, which was founded by Baha'ullah. This temple is an ideal place of meditation which is open to all other faiths. Lotus Temple is so named because of the lotus like structure of the temple. It is one of seven Bahai Houses of Worship in the world and is one of the most visited sites in the world with an average of three and a half million visitors each year.

The temple was designed by Fariborz Shaba, a Canadian architect of Iranian origin. He took 10 years in designing the structure. The construction of the building began in 1980 and was completed in 1986 at a cost of Rs. 10 million and was opened to public on January 1, 1987. This place of worship of the Bahai sect is literally constructed in the shape of a large, white lotus flower. The Lotus Temple has also won numerous architectural awards.

The temple is set amidst 26 acres of lush landscaped garden. The temple has 27 free-standing white petals made of marble arranged in clusters of three to form nine sides. It measures around 35 m in height and is surrounded by 9 pools. The nine doors of the Lotus Temple open onto a central hall slightly more than 40 m tall that is capable of holding up to 2,500 people. These 9 walkways represent the nine unifying spiritual paths of the Baha'i faith. The surface of the temple is made of white marble from Penteli Mountain in Greece. Due to its magnificent structure, Lotus Temple is also known as the Taj of Modern India.

The temple has no idols, religious pictures and other religious symbols like all other worship places. It is the perfect place for meditation, peace and wisdom. The visitors are required to maintain silence inside the hall. The Bahai temple looks spectacular just before sunset when the temple is lit us beautifully.