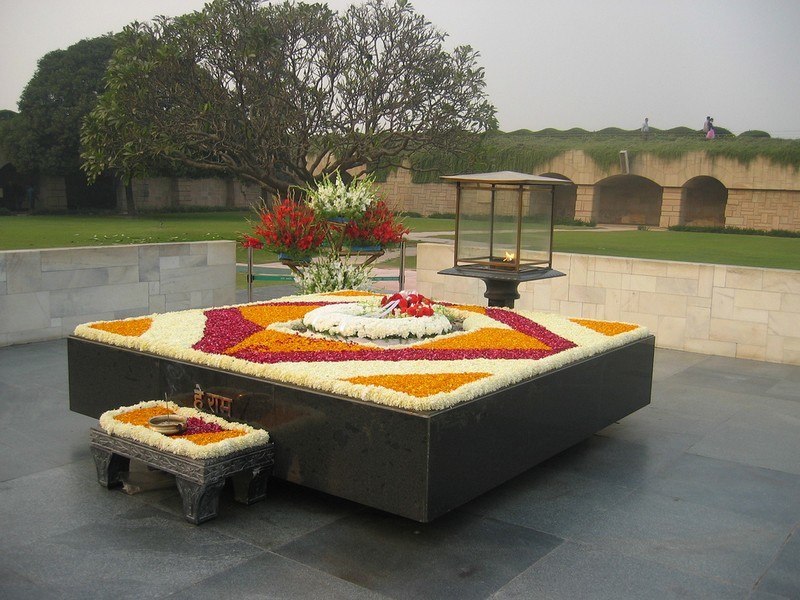 At a distance of 5 km from New Delhi Railway Station, Raj Ghat is a memorial dedicated to the Father of the Nation, Mahatma Gandhi located on the banks of Yamuna River in Old Delhi.

Raj Ghat is the last resting place of Mahatma Gandhi. The cremation of Mahatma Gandhi took place at the Raj Ghat on 31st January 1948, a day after his assassination. The memorial was designed by Vanu G. Bhuta, who intended it to reflect the simplicity of the Mahatma's life. It has won several awards for its architectural design.

The memorial stone of Mahatma Gandhi placed on a simple square platform made of black stone, with the words Hey Ram inscribed on it. It is left open to the sky while an eternal flame burns perpetually at one end. The road on which it is located is also known as the Mahatma Gandhi Road.

It is situated amidst a well maintained garden with fountains and numerous trees that give the area a serene atmosphere. Near the memorial, there are labeled trees planted by visiting dignitaries such as Queen Elizabeth II, Ho Chi Minh, the former Australian Prime Minister Gough Whitman and the former US president Dwight Eisenhower. Around the sides of the garden are quotes and thoughts written by Gandhi, engraved in different languages.

All guests must remove their footwear before entering the Raj Ghat walls. To the north of the Raj Ghat is the cremation site of Jawaharlal Nehru known as the Shanti Van. Near to this are the cremation sites of Indira Gandhi, who was killed in 1984 and her two sons Sanjay (1980) and Rajiv (1991). Opposite to Raj Ghat is the Gandhi National Museum which contains some of Gandhi's belongings.

Innumerable visitors including political leaders pay their homage to Mahatma Gandhi. Nowadays, it is customary for foreign dignitaries visiting India to pay homage to Gandhi here, by laying flowers on the platform. A remembrance ceremony is held every Friday at Raj Ghat, besides the prayer sessions held at the Ghat on Gandhi's birth and death anniversaries.