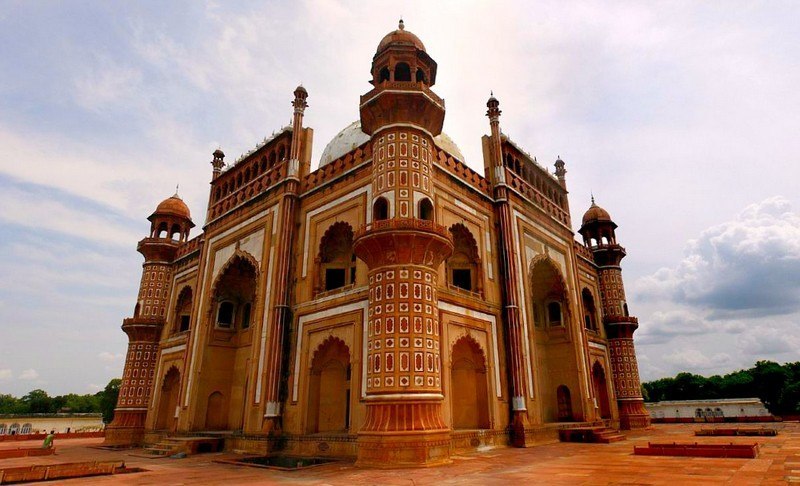 Travel Tips: This is UNESCO World Heritage Site. It is close to Lodi Garden and both can be visited together.

At a distance of 7.5 km from New Delhi Railway Station and 7 km from Hazrat Nizamuddin Station, Safdarjung Tomb is located near the Safdarjung Airport at the T-junction of Lodi Road and Aurobindo Marg. It is located at a distance of 1 km from the Lodi Garden. It was declared as a UNESCO World Heritage site in 1993.

Safdarjung Tomb was built by his son Shujaud Daula in 1754. It is among the best tourist places in Delhi and also among the top historical places in Delhi city. This Tomb is dedicated to Mirza Muqeem Abdul-Mansur Khan, who was also known as Safdarjung. He was the viceroy of Oudh under Muhammad Shah and prime minister under Ahmad Shah. The tomb is the last example of the pattern which began with Humayun's tomb.

The Tomb was built in distinct Mughal architecture. Constructed in the center of a large garden, the compound is decorated with ponds and fountains. Crafted out of red sandstone with a white marble dome, the Tomb is built on a raised platform. The tomb has a gate on the East and pavilions on the other sides, namely, Moti mahal or the pearl palace, Jangli mahal and Badshah Pasand. The compound is surrounded by a high outer masonry wall, with channels to carry water to different pavilions. The walls contain a series of arches on its inner side and the four corners are articulated with octagonal chhatris. The entrance gateway contains few apartments, a courtyard and a mosque.

It is a square double-storeyed structure and surmounted by a bulbous dome of marble. Red and buff sandstone has been used in its facing, a large proportion of which was stripped off from Abdul Rahim Khan-i-Khanan's tomb. The central chamber of the tomb is surrounded by eight rooms all around with cenotaph in the middle. The interior of the tomb has designs made with plaster. There are four towers around the main tomb at the corners which are polygonal in shape with open arches in the middle.

There is an underground chamber in the mausoleum which houses the burial chambers or graves of Safdarjung and His wife. The monument is under the control of Archaeological Survey of India (ASI). The complex also has a madrasa. To the south of this tomb is the historic site of the battlefield where Timur had defeated Nasir-ud-Din Tughlaq of Delhi Sultanate in 1398 AD.