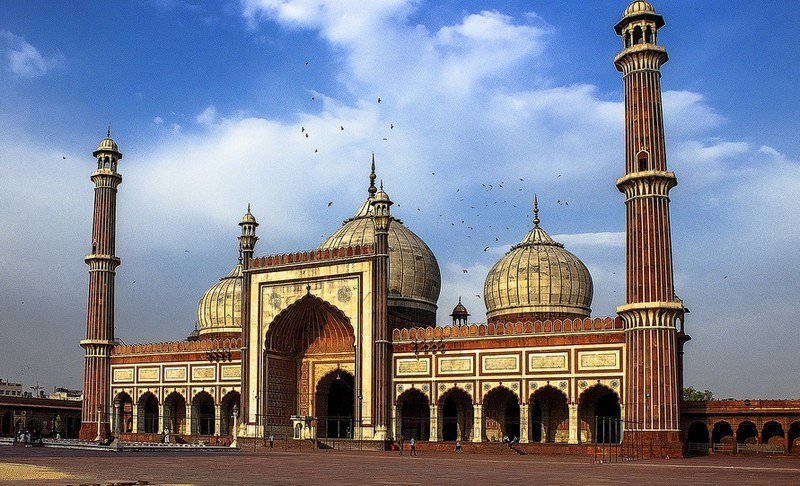 At a distance of 3.5 km from New Delhi Railway Station, Jama Masjid or Masjid-i-jahan-Numa is located in the center of old Delhi near the famous Red Fort. This is one of the largest mosques in India and one of the last monuments built by Mughal Emperor Shah Jahan. It is one of the top places to visit in Delhi city and also among the top historical sites in Delhi.

Jama Masjid was commissioned by Shah Jahan between 1644 and 1656 at a cost of 1 million rupees. This mosque was constructed with the efforts of more than 5,000 workers. The Masjid was completed under the supervision of Saadullah Khan, the Prime Minister of Shah Jahan and was inaugurated by an imam from Bukhara, present-day Uzbekistan. After the British victory in Revolt of 1857, they occupied the mosque and stationed their soldiers here.

The mosque has three large gates, four towers and two 40 m high minarets constructed using red sandstone and white marble. The mosque is built on a red sandstone porch, which is about 30 feet from ground level and spreads over 1200 square meter. There are three domes on the terrace which are surrounded by the two minarets. The minarets are 130 feet (40 m) high and consist of 130 steps. The minarets consist of five storeys, each with a balcony. The adjoining edifices are filled with calligraphy. The first three storeys of the minarets are made of red sandstone, the fourth of marble and the fifth of sandstone.

The floor of the mosque has been totally covered with white and black marbles that give the look of prayer mat as in Mohammedan culture. The outer courtyard of this mosque can hold around 25,000 people at a time, which is rectangular in shape and measures 75 m by 66 m. The prayer hall is decorated with arched marble structures inscribed with detailed history of the mosque. The cabinet in the north gate of the Jama Masjid contains a collection of Muhammad's relics - the Quran written on deerskin, a red beard-hair of the prophet, his sandals and his footprints implanted in a marble block.

The mosque is commonly called Jama which means Friday. The architectural plan of Badshahi Masjid, built by Shah Jahan's son Aurangzeb at Lahore, Pakistan, is similar to the Jama Masjid.

Tourists are not allowed during prayer hours.