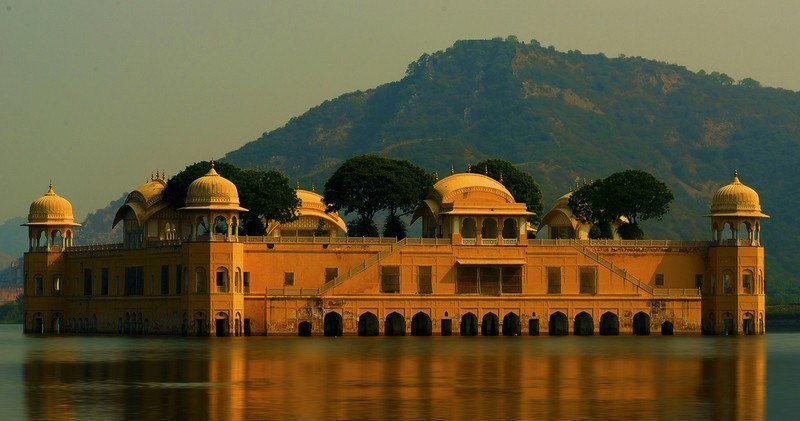 At a distance of 11 km from Jaipur Junction Railway Station and 8 km from Amer Fort, Jal Mahal or the Water Palace is a palace located in the middle of the Man Sagar Lake in Jaipur. This is one of the biggest artificial lakes in Jaipur. The lake used to be a bird watcher's paradise in the past and was a favorite ground for the Rajput kings of Jaipur for royal duck shooting parties during picnics.

Jal Mahal was built in 18th century by Sawai Madho Singh I. Jal Mahal was constructed for serving the purpose of a summer resort for his family and guests. The palace was renovated and expanded in the 18th century by Madho Singh II. The Jal Mahal palace is considered an architectural beauty built in the Rajput and Mughal styles of architecture. It provides a picturesque view of the lake from the Man Sagar Dam and the surrounding Nahargarh hills. The palace was built using red sandstone. It is a five storied building out of which four floors remain under water when the lake is full and the top floor is exposed. The rectangular Chhatri on the roof is built in Bengali style. The chhatris on the four corners are octagonal. Inside, a staircase connects the lower floors to Chameli Bagh, an aromatic terrace garden on top of the palace which provides a panoramic view of the Aravalli Hills.

The palace has suffered subsidence in the past and also damage due to water logging, which have been repaired under the restoration project undertaken by the Government of Rajasthan. The intricately redecorated interiors of the palace, featuring floral designs are quite attractive. The palace looks mesmerizing in the evenings when the entire structure is immersed in flood lights. A number of migratory birds can also be seen around the Jal Mahal during winters.

The Palace has been turned into hotel now and it is closed for general public. The palace can only be reached by a boat.