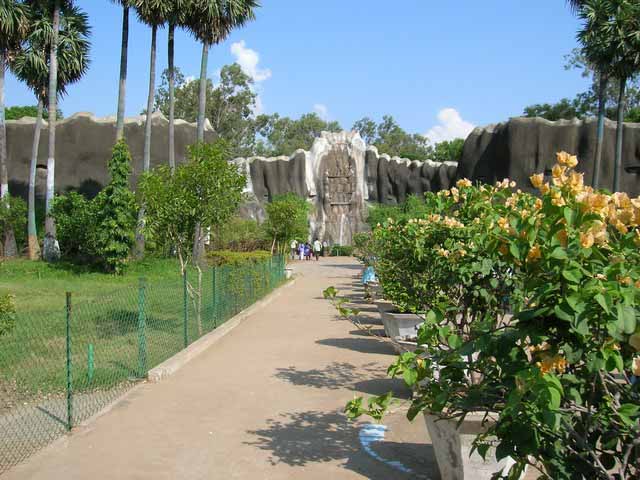 At a distance of 38 km from Chennai Central Railway Station, Arignar Anna Zoological Park is a zoo park located at Vandalur in Chennai city of Tamil Nadu. Also known as Vandalur Zoo, it is one of the finest zoos in India, and among the best places to visit as part of Chennai Tour.

Established in 1855, Arignar Anna Zoological Park is the first public zoo in India, and is said to be one of the biggest in South East Asia. It is shifted to the current location of Vandalur reserved forests in the year 1979 and officially opened to the public in 1985. It is affiliated with the Central Zoo Authority of India. It is one of the popular Chennai tourist places.

Spread over an area of 602 hectares (1,490 acres), the zoo houses 2,553 species of flora and fauna. As of 2012 the park houses around 1,500 wild species, including 46 endangered species, in its 160 enclosures. One can spot a tiger, panther, wolf, deer, elephants, and other animals here. The park has a special free-range zone where animals can freely roam in peace. There are two sanctuary aviaries (with a walk-though aviary), a butterfly house, a reptile house, an amphibian house, a primate house, a crocodile enclosure, and the shark-shaped aquarium.

The park, with an objective to be a repository of the state's fauna, is credited with being the second wildlife sanctuary in Tamil Nadu after Mudumalai National Park. The park holds research and conservation practices to create awareness among the masses. Also, the Park has a library with a good collection of wildlife-related books and information. Elephant safari is also available in the park.

Timings: 9 AM to 6 PM, Closed on Tuesday