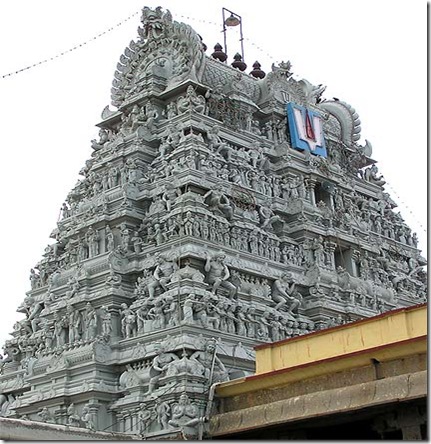 At a distance of 4.5 km from Chennai Central Railway Station, Sri Parthasarathy Temple is a Hindu temple located in the Triplicane locality of Chennai. It is one of the popular temples in Tamilnadu, and among the must-visit places during your Chennai Trip.

Sri Parthasarathy Temple is dedicated to Lord Krishna. It was originally built by the Pallavas king Narasimhavarman I in the 6th century CE and was renovated by the Vijayanagara kings around the 15th century. It is one of the oldest temples as well as the famous places to visit in Chennai.

The temple was built in the typical Dravidian architecture style, complete with gopurams and mandapas with intricate carvings and stucco figures. The temple has icons of five forms of Vishnu: Yoga Narasimha, Rama, Gajendra Varadaraja, Ranganatha, and Krishna as Parthasarathy. The sanctum sanctorum has the idol of Parthasarathy along with his consort Rukmani, his brother Balaram, friend Satyaki, son Prathymnan and grandson Anirudhan. Together the five warriors make the Pancha Veera and conform to many stories from Mahabharata or the Vaishnav canonical works. The temple has a holy tank, which is said to be the birthplace of Goddess Mahalaxmi, Vishnu's consort.

In the month of April/May, the temple celebrates the Brahmotsavam festival with grandeur. Udayavar Uthsavam, Sri Varadarajar utsavam, Sri Nammalwar Utsavam, and Vasanthothsavam are the other festivals celebrated here with great pomp and fervor.