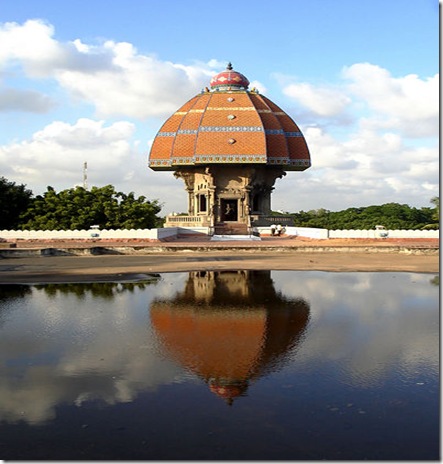 At a distance of 7 Kms from Chennai Central Railway Station (located in Vaikuntapuram, less than 1 Kms from local Kodambakkam Railway Station), Valluvar Kottam is a monument built to pay homage to Tamil Poet Saint Thiruvalluvar.

Inaugurated in 1976, the memorial is the form of 101-feet high temple chariot and is the replica of the temple chariot in Thiruvarur. A 33m tall life-size statue of the saint has been installed in the chariot. Another amazing attribute of the auditorium is that it is not supported by a single pillar and stands without any support.

The 133 chapters of his famous work Thirukkural have been depicted in bas-relief in the front hall corridors of the chariot. All the 1330 verses of the poet's epic are depicted on the granite pillars, which surround the auditorium. The auditorium at Valluvar Kottam is said to be the largest in Asia and can accommodate about 4000 people.