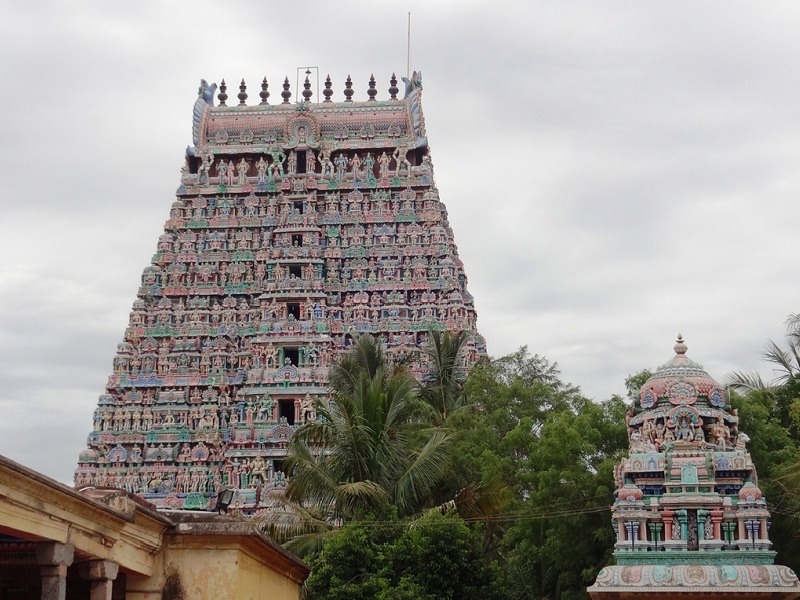 #1 of 22 Places to Visit in Kumbakonam

At a distance of 2.5 km from Kumbakonam Railway Station, Adi Kumbeswarar Temple is a famous Hindu temple located in the center of Kumbakonam in Tamil Nadu. This temple is considered to be the 26th Paadal Petra Sthalam in the Chola kingdom that spread south of the River Cauvery, and among the must include places in Kumbakonam tour packages

Adi Kumbeswarar Temple, also known as Thirukudamooku, is dedicated to Lord Shiva. It was built during the Chola dynasty in the 9th century CE and was renovated by Govinda Dikshitar, the Chieftain of Achutha Nayakar of Thanjavur in the 16th century AD. The temple is maintained and administered by the Hindu Religious and Charitable Endowments Department of the Government of Tamil Nadu.

According to mythology, when the world was facing destruction due to the devastating tsunami, Lord Brahma approached Lord Shiva to know from where he had to restart creation. Lord Shiva suggested that Brahma make a magic pot with the sand collected from various sacred places and floats it in the flood water and also taught the procedure of leaving it on the water. Kumbakonam is the place where the pot stopped and then Lord Shiva shot an arrow on the pot. The nectar spilled out and thus life was revived on the earth. A few drops of the nectar fell into a natural cavity in this spot and it became the Mahamaham tank.

Among the most popular Kumbakonam places to visit, the Kumbeswarar Temple is an architectural marvel which reflects the typical Dravidian architecture and it covers an area of about 4 acres. This temple consists of three Prakaras and three Gopurams. The East Gopuram comprises 9 stories with a height of 128 ft. There are small Gopurams in the north and west and the Mottai (domed-bald) Gopuram in the south.

Adi Kumbeswarar is the presiding deity of the temple and the shrine is located in the center. The Linga is broad at the bottom and narrows at the top in the shape of a needle. Kumbeswarar Lingam believed to have been made by Shiva himself when he mixed nectar of immortality and sand. Goddess Manthrapeeteswari Mangalambika is his consort and her shrine is situated to the left of the Kumbeswarar shrine. The unique feature of this temple is the 27-star sign and 12 sun shines that are sculptured in a large block of stone. Lord Ganapati, Lord Muruga, and Kiratamurti are the other shrines present at this temple. The Mahamaham tank, Potramarai Tirtha, Varuna Tirtha, Kasyapa Tirtha, Chakra Tirtha, Matanga Tirtha, and Bhagavad Tirtha are the seven outlying water bodies associated with the temple.

Among the various festivals, Mahamaham that is celebrated once in twelve years is of very great importance. Sabthasthanam, Brahmotsavam, Thirukalyanam, Thirumanjanam, Aadi Pooram, Panguni Festival, Butter Pot Festival are grandly celebrated in this temple.