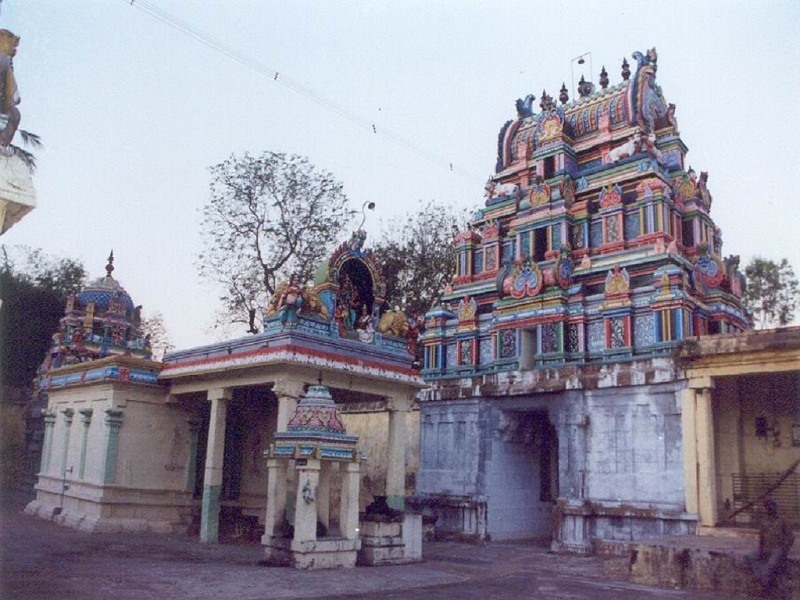 At a distance of 13 km from Kumbakonam, Sri Kalyanasundareswarar Temple, also known as Panchavarneswarar Temple is an ancient Shiva shrine located at Nallur in the outskirts of Kumbakonam. This is one of the top temples in Kumbakonam.

The original masonry structure was built during the Chola dynasty in the 9th century, while later expansions are attributed to Vijayanagar rulers. The main deity here is Panchavarneswarar and he is also known as Kalyanasundareswarar. The Shiva Lingam at Kalyanasundareswarar Temple, Thirunallur is a swayambhu lingam. The miracle of the temple here is the color of the deity changes 5 times a day as copper, light red, molten gold, Emerald and Multicolor for every 2 1/2 hours. This is one of the Mada Koil or temples built at an elevation by Kochengat Cholan. This is one of the 275 Padal Petra sthalams of Lord Shiva.

According to the legend, during the divine Shiva-Parvathi wedding in Mount Kailash, the place went down due to the heavy weight of the presence of all the gods. To balance the level of the earth, Lord Shiva sent Sage Agasthya to South. The sage had to sacrifice his wish of witnessing the wedding. Lord assured him that he would grant the wedding darshan to him in this holy place. The sage installed a lingam behind the main lingam in the temple to worship Shiva.

The temple has a five-tiered Rajagopuram. The main shrines of the temple are located in an artificial hillock. The image of the presiding deity, Kalyanasundareswarar, in the form of lingam in a pedestal, occupies the main sanctum. The second lingam, believed to be installed by sage Agasthya is behind the main lingam. The shrine of Girisundari Amman is located in the first precinct facing west. The temple also has a bronze image of Nataraja, Ganapathi, Kali, sage Agasthya and the three Saiva saints Appar, Sambandar and Sundarar. The temple has a large tank called Sapthasagaram, located outside the main entrance.

Maha Shivrathri in February-March and Margazhi Tiruvadhirai in December-January are the popular festivals celebrated at this temple.