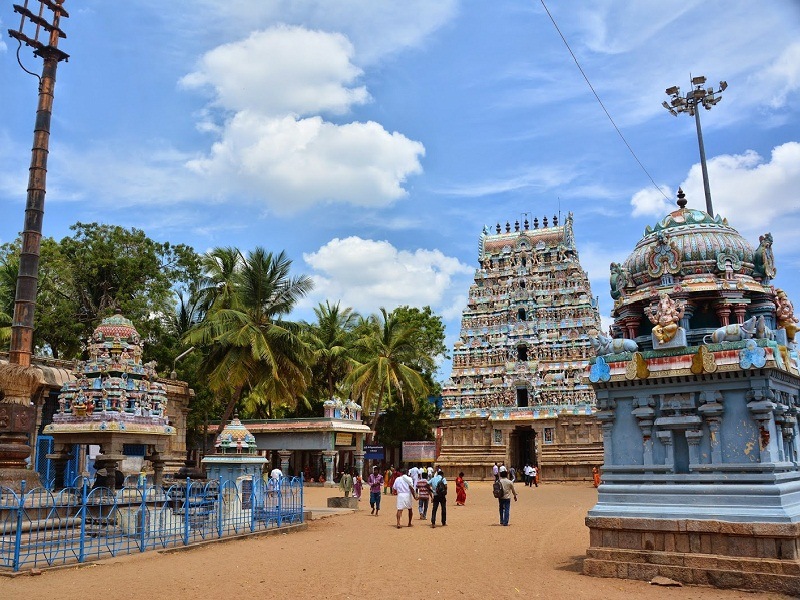 At a distance of 5 km from Kumbakonam Railway Station, Sri Naganathaswamy Temple or Rahu Sthalam is an ancient Shiva temple situated at Thirunageswaram in Kumbakonam Town of Tamilnadu.

Sri Naganathaswamy Temple is one of the 9 Navagraha Temples around Kumbakonam and is dedicated to Rahu. The temple has a separate shrine for Rahu. Here Rahu Bhagawan can be seen with his two consorts Nagavalli and Nagakanni together. Sri Naganathaswamy Temple is one where Lord Shiva was worshipped by Rahu and got relieved of a curse. A unique feature of the temple is that Rahu Bhagawan is seen with human face. Usually in other places, Rahu is seen with a serpent face.

The Thirunageswaram Temple has vast prakarams, towering gopurams, and several mandapas. There are four entry towers with fort like walls which surround the outermost prakaram. The Vinayaka temple, Balipeetam, and Nandeeswarar Mandapam are seen on the eastern gateway. Lord Rahu's idol is placed in the south-west corner. The southern side of the temple has a water head with four mandapas, surrounded by a 100 pillar mandapam in a temple-car style. The mandapam is decorated by artistic pillars in all directions.

It is believed that by doing milk abhishekam here for Rahu during Rahu kalam the delay in getting married, childlessness, troublesome married life, ill-effects of Kalasarpa Dhosha and Sarpa Dhosha are all cured. An important aspect of Rahu Temple at Thirunageswaram is that during milk abhishekam, the milk when poured over the idol turns blue which is clearly visible.