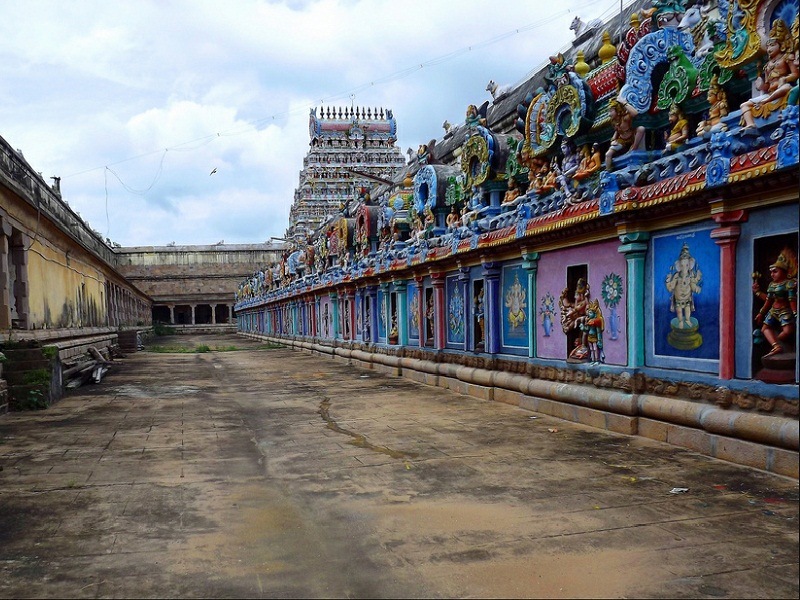 #5 of 22 Places to Visit in Kumbakonam

Dedicated to Lord Shiva, the temple complex is one of the largest temple complexes in Tamil Nadu. The present masonry structure was built during the Chola dynasty in the 9th century, while later expansions are attributed to Thanjavur Nayaks during the 16th century. There are 149 inscriptions associated with the temple indicating contributions from Pandyas, Cholas, Thanjavur Nayaks and Thanjavur Maratha kingdom.

The temple has a five-tiered Rajagopuram and three precincts, each enclosed inside huge walls and having gateway towers for each of them. The temple is rectangular in plan with East-West orientation and has four entrances in each of the four directions. The three precincts are called Aswametha Pradakshina, Kodumudi and Pranava. Pranava precinct has lot of sculptures dating back to the Nayak period of the 16th century.

The Shiva Lingam here is a swayambhu (self-manifested). Shiva is believed to have appeared as a flame to please Agastya and other sages who were performing penance; hence the presiding deity is referred as Jyothirmaya Mahalingam. His consort Parvati is depicted as Pirguchuntaragujambigai. This is referred to as Madhyarjuna Kshetram.

The Ambal Shrine is one of the Sakthi Peetams and is on the right side of the main shrine. There is a separate shrine for Mookambiga Amman. There are stone images of Pattinathar and Bhadragiriyar in the eastern and western gateways of the temple respectively. There are five temple tanks inside the temple, namely Karunyamirdha Theertham, Soma Theertham, Kanaga Theertham, Kalyana Theertham and Iravatha Theertham. There are 27 other water bodies that are associated with the temple.