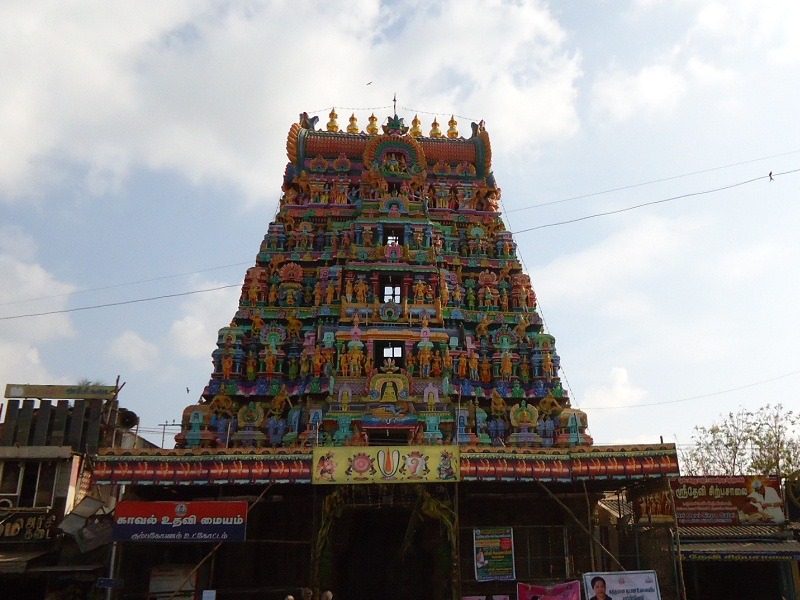 #6 of 22 Places to Visit in Kumbakonam

At a distance of 2 km from Kumbakonam Railway Station, Ramaswamy Temple is an ancient Hindu temple located on the southeastern portion of the Porthamarai Kulam in Kumbakonam.

This temple is dedicated to Lord Rama, an incarnation of Lord Vishnu. Achutha Nayaka of Thanjavur constructed the temple during the 16th century CE. The temple was built in Dravidian architectural style. This temple consists of one Gopuram, one Maha Mandapam and Sanctum Sanctorum. The columns of Maha Mandapam are enriched with some of the famous stone carvings of Vamana Avatharam, Meenakshi Kalyanam and Sugreeva Pattabishekam. The outer Prakaram consists of 219 wall paintings, which explains the series of incidents from the great Epic Ramayana.

This temple, known as the southern Ayodhya, is unique as Rama and Sita are in a Pattabishekam posture-Coronation scene. Lakshmana stands next to Rama, holding a bow and arrows; they are flanked by Bharatha holding an Umbrella and Shatrughna holding a fan. This is the only temple where we can see idols of Rama, Sita and Lakshmana along with Bharatha and Shatrughna. Hanuman is depicted as singing in praise of the Lord with the help of a veena. Alwar Sannathi, Sreenivasa Sannathi, and Gopalan Sannathi are the other temples located within the temple complex.

Sri Rama Navami is celebrated in a grand manner on the 9th day after New Moon in March/April. This is one of the five Vishnu temples that are connected with Mahamaham festival which happens once in 12 years in Kumbakonam, the other four temples are Sarangapani Temple, Chakrapani Temple, Rajagopalaswamy Temple and Varahaperumal Temple.