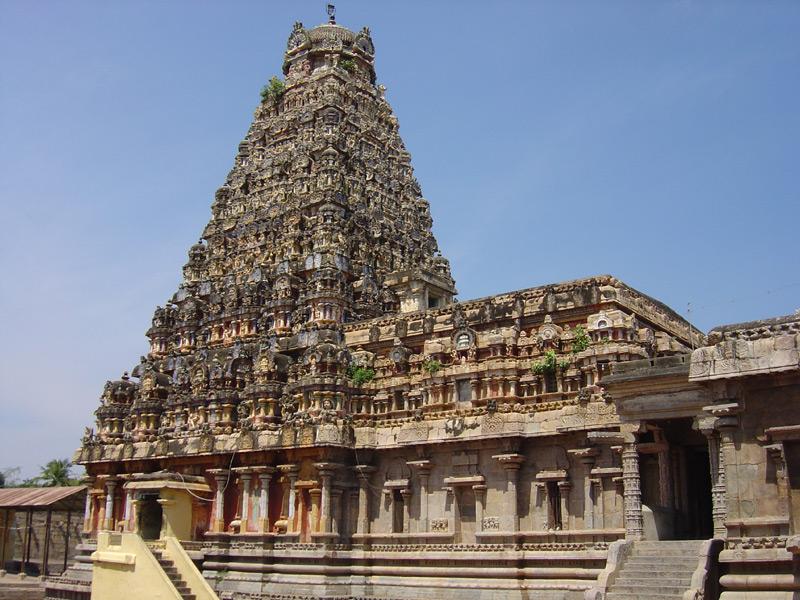 Travel Tips: This place is usually visited from Kumbakonam (9 Kms).

At a distance of 500 m from Thirubhuvanam Bus Station, 9 km from Kumbakonam and 50 km from Thanjavur, Thirubhuvanam is well known for Kampahareswarar Temple, also known as Sarabeswarar temple. It is an ancient temple situated in Thirubhuvanam on Mayiladuthurai - Kumbakonam road.

The Kampaheswarar Temple is a Hindu temple dedicated to Lord Shiva; the temple enshrines Kampaheswarar as the presiding deity, worshipped in the form of a Shiva Linga. According to legend, Shiva is believed to have relieved Kampa (quaking) of a king haunted by evil spirits on account of the king killing a Brahmin by mistake. This led to the name of Kampaheswarar.

The temple was built by Kulottunga Chola III (1178-1216), to celebrate a military victory. However, Pandyan kings have completed the construction of this temple. The architecture of the temple resembles Brihadeshwarar Temple of Thanjavur, Airavatesvara Temple at Darasuram and Gangaikonda Cholapuram Temple. It is believed that the temple was the last holy place to have been built by the Chola Kings.

The temple follows the Dravidian style of architecture. Similar to Brihadeswarar Temple, the vimana of the temple is extremely high compared to the Rajagopura. The 130 ft high tower (gopuram) of the sanctum sanctorum boasts several exquisitely carved sculptures. There are two gopuras and two enclosures, inner sanctum, artha mandapa, maha mandapa and mukha mandapa. The inner sanctum is a square-shaped structure. The Vimana has six bases and sculptures of the scenes of puranas on its walls. The front part of the temple has been built to resemble a chariot that stands 120 ft high. The walls of the chariot as well as the temple depict scenes from the Ramayana.

The deity is believed to have relieved devas from the fury of Narasimha after he slayed Hiranyakasipu the demon. A sculpture of Sarabeshwarar is seen with three legs, with body and face of a lion and a tail and four arms. In this temple the Utsava murthy (procession idol) is the Sarabeswarar. There is a belief that Sarabeswarar destroy all evils and enemies.

Chitirai Brahmotsavams, Margazhi Thiruvathirai, Karthika Deepam and Pradhosam are the festivals celebrated in this temple with great pomp and fervor. Every year thousands of devotees and tourists visit this majestic temple. This place is also a famous silk weaving industry.