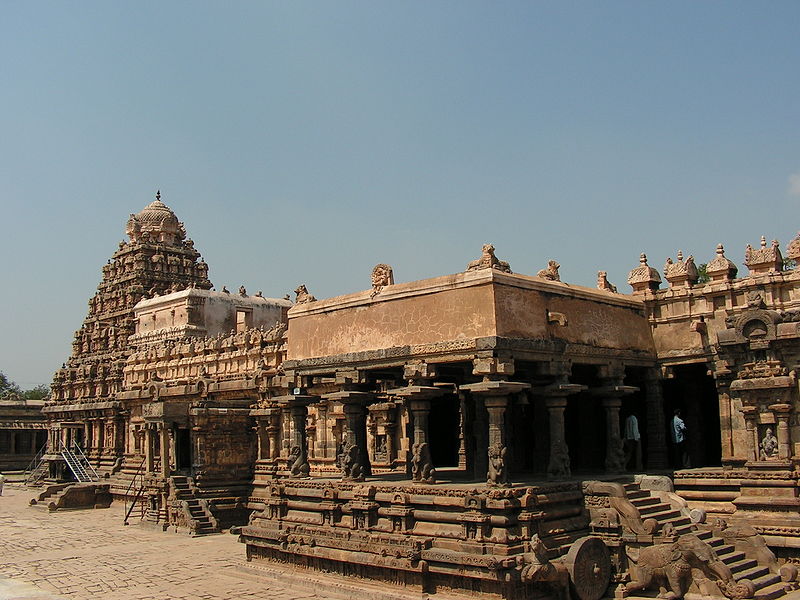 #2 of 22 Places to Visit in Kumbakonam

Travel Tips: Kumbakonam (8 Kms) can be visited along with this place

At a distance of 8 km from Kumbakonam, and 34 km from Thanjavur, Darasuram Airavathesvara Temple is an ancient Hindu temple located at Darasuram town near Kumbakonam in Tamil Nadu. It is one of the popular places of heritage in Tamilnadu, and among the best places to visit as part of Kumbakonam tour.

Airavatesvara Temple in Darasuram is deicated to Lord Shiva. A UNESCO world heritage site, it is a part of the popular trio known as the Great Living Chola Temple along with Brihadeeswara Temple at Thanjavur and the Gangaikondacholisvaram Temple at Gangaikonda Cholapuram. Airavatesvara Temple was built by the Chola King Rajaraja Chola II in the 12th century CE. It is amongst the eighteen medieval era Hindu temples in the Kumbakonam area. The shrine displays the Vaishnavism and Shaktism legs of Hinduism, and the traditional Nayanars- the Bhakti saints of Shaivism.

According to legend, Airavata, the white elephant of Indra, worshipped Lord Siva in this temple. As per the mythology, Airavat was cursed by sage Durvasa for disrespected the hermit. The curse went on to discolor the pearly white skin of the elephant. Airavat got his color back by taking a dip in the water tank of this Lord Shiva's Temple. That is how the temple got its name. This story is also carved in stone in the inner chambers of the shrine.

Airavatesvara Temple is one of the four temples built by the Cholas entirely on stone Vimanas. Though much smaller in size when compared to the Brihadisvara temple at Thanjavur and
Gangaikondacholapuram, this temple is different as it is highly ornate in execution. The temple consists of a sanctum and axial mandapas. The front mandapa known in the inscriptions as Rajagambhiran Tirumandapam is unique as it was conceptualized as a chariot with wheels. The pillars of this mandapa are highly ornate. This chariot hall has intricately carved steps going from east to west. It is believed that when one walks on them they produce pleasant music. They are thus, known as 'singing steps'.