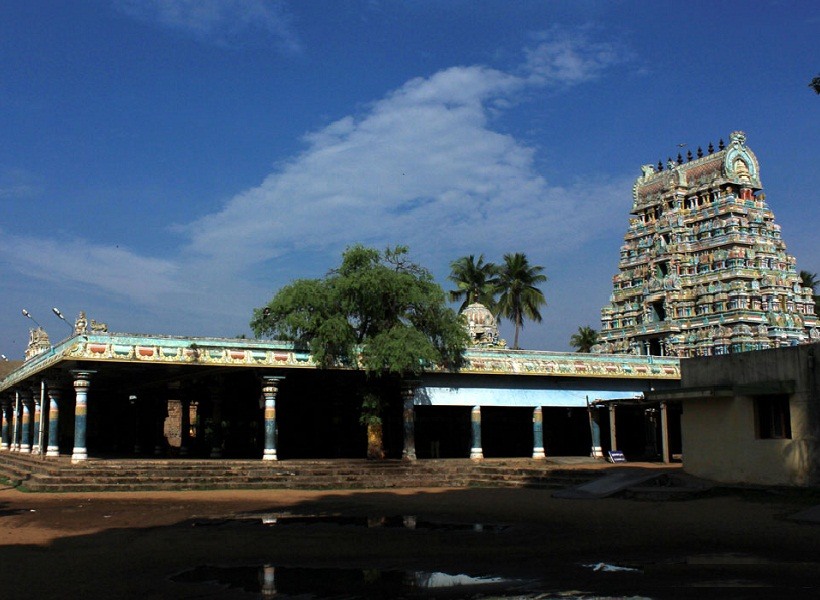 #7 of 22 Places to Visit in Kumbakonam

At a distance of 8 km from Kumbakonam, Patteeswaram is famous for the Sri Durga Shrine and a Shiva Temple called Sri Dhenupureeswarar or Thenupureeswarar Temple.

Dhenupureeswarar Temple is fairly a big temple and is dedicated to Hindu god Shiva. This temple has 5 tall gopurams and 3 prakarams. The sanctum sanctorum of the main deity Thenupureeswarar is located in the central mandapam of the first prakarams. There are shrines for Chandikeswarar, Natarajar and Sun god. To the north of the main sanctum sanctorum is the shrine for the female deity Sri Gnanambikai.

According to the legend, divine cow Kamadhenu's daughter Patti is said to have worshipped Lord Shiva here and hence this sthalam is called as Patteeswaram. Sage Viswamitra got the title of Brahma rishi at this Sthalam. Sri Rama is said to have worshipped Shiva at this sthalam to absolve himself of the Chaayadosham which he got by killing Vaali. Shiva is said to have blessed Sambandar by sending through his Shivaganas an umbrella made with pearls (Muthu Pandal), to protect him from the scorching summer sun when he was coming to Patteeswaram. It is said that God Shiva asked Nandi to move aside so that he can see Sambandar while he was coming to this temple to have darshan of Lord Shiva. Hence, the Nandi in this temple is not in a straight line facing the sanctum sanctorum.

Though this is a Shiva temple, the most famous deity in this temple is Goddess Durga. The Cholas brought the Durga idol to this place and built a separate shrine for the goddess. She is basically a guardian deity of this temple. Goddess Durga is in peaceful appearance, seated on a lion and with her foot on the demon, Mahishasura. She has eight hands with each one holding the conch, discus, bow, arrow, sword, shield and a parrot.