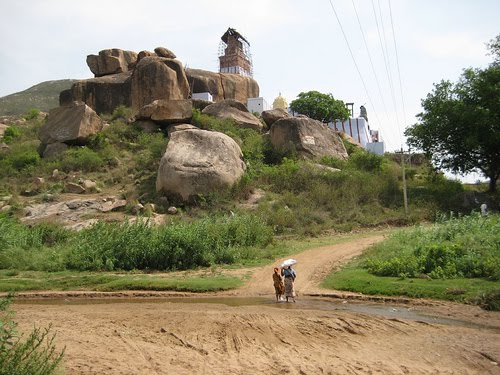 At a distance of 2 km from Kathalampet and 21 km from Vellore Town Railway Station, Sri Lakshmi Narasimha Swamy Temple at Singiri Koil is a Hindu shrine dedicated to Lord Narasimha, an incarnation of Lord Vishnu. It is situated on Vellore - Polur road.

This temple is situated on a small hillock which is about 80 feet high and can be reached by a flight of about 100 steps. As per the inscriptions around the sanctum sanctorum, this is an 8th century temple built by the local chieftain, Rajavarman at the behest of Lord Narasimha who appeared in his dream.

The main idol in the sanctum sanctorum is seen in a sitting posture with four hands - two hands hold the conch and the discus, his third hand is on his lap and fourth hand is around the waist of Goddess Lakshmi. The image of the Lord is nearly six feet in height with Goddess Lakshmi is seated on the lap of the Lord.

There is a separate shrine for Lord Anjaneya, who is known here as Sri Bala Anjaneya. The idol is one feet high. Bala Anjaneya, who appears like a small child is believed to bestow the boon of parenthood on the childless. The temple also has a separate shrine for Sri Garuda. A small stream flowing in front of the temple and pilgrims have to cross the stream by foot. The temple will be closed in peak monsoons if the river flows in full stream.

Narasimha Jayanthi, Vaikunta Ekadasi & Ratha Sapthami are major festivals celebrated here. Thirumanjanam is performed on every Swathi Nakshatram, which is the birth star of Narasimha.