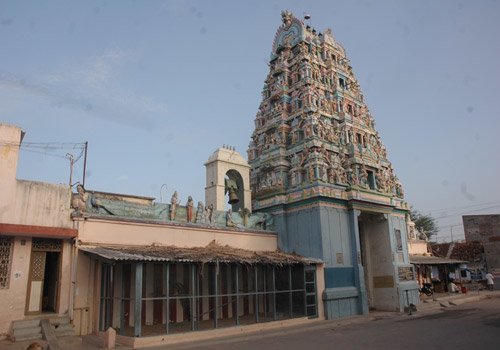 At a distance of 6.5 km from Vellore Town Railway Station, The Subramanya Swamy Temple is located in Kangeyanallur and is dedicated to Lord Murugan. The presiding deity is also known as Kangeyan.

The presiding deity Subramanya is found in a standing posture along with his consorts Valli and Devasena in wedding form in the sanctum sanctorum. Saint Arunagiriar had sung praising of the Lord of the temple in his Tirupugazh. Devotees offer their first worship to saint Arunagiriar before going to Lord.

According to legend, Devas prayed to Lord Shiva to protect them from the atrocities of the demons. Lord Shiva created six sparks from His forehead eye. Vayu and Agni took them and left in Holy River Ganga. Six children came from the sparks then and were taken care of by Karthika maidens. Mother Parvathi then came there and embraced the children together which became a single child with six faces and named Kangeyan. Lord Muruga graces in this temple with this name.

The temple has two entrances with five tier temple tower (Rajagopura). Vinayaka in this temple is praised as Sundara Vinayaka. There are shrines for gods Vinayaka, Kasi Viswanatha, Visalakshi, Saraswathi, Lakshmi, Sun, Veerabadra, among many other.

The annual festival is celebrated in February/March, Vaikasi Visakam in May/June and Thai Poosam in January/February are the main festivals celebrated in the temple.