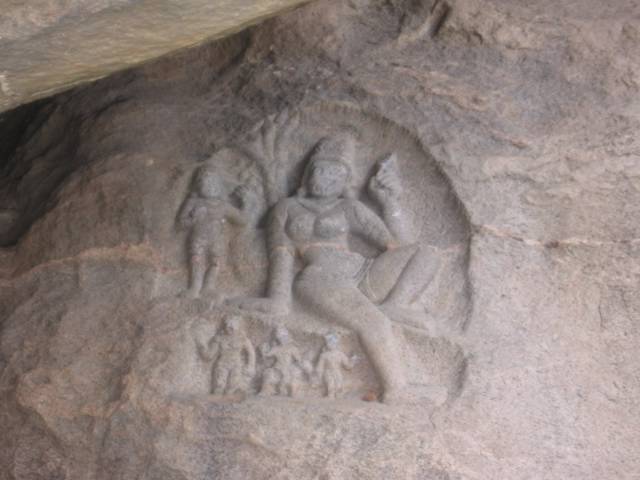 At a distance of 3.5 km from Vilapakkam Bus Stop and 30 km from Vellore, Pancha Pandava Malai or Pancha Pandava hill is situated in a small town of Vilapakkam beside the State Highway 129 between Arcot and Kannamangalam. The hilly area was a flourishing Jain center between 9th & 11th centuries as it is evident from the rock cut cave temple, natural caves with Jain figures and inscriptions.

The name Pancha Pandava Malai is associated with Pandavas from Mahabharata. The hill is locally called as Tiruppanmalai, meaning Scared Milk Hill. As per an inscription from Chola period found in a structural temple in this village, it is suggested that this town was under the strong influence of the Jainism during 10th century.

The rock cut cave temple is one of the largest cave excavations built in Pallava style. This east facing cave is excavated at the foot of a large hillock. The cave has a large mukhamandapa supported by twelve pillars arranged in tow rows. The pillars are uniformly square from top to bottom. There are curved corbels above the pillars and pilasters. There are seven niches carved out on the back wall of the cave with empty cells. The side walls are left with square un-carved blocks.

As per an inscription, this hill is referred as Tiruppanmalai and there are references of a figure of Yakshi, Naganadi and a Jain Thirthankara. The figure of Yakshi is carved on a large rock face near a pool of water. Yakshi is shown sitting under a tree with one leg on the ground and one leg bent on the seat holding a chauri (fan). There are four figures around Yakshi. There is a Jain Tirthankara figure on the top of the rock face shown seated in Yogasana. On southern face of the same rock we see two carved figures, one of naked male figure and an animal.

There are two inscriptions on this rock face, one of the Pallava king Nandivarman and another of the Chola king Rajaraja I.